Vocab questions reduce spelling bee to 3 letters: A, B or C 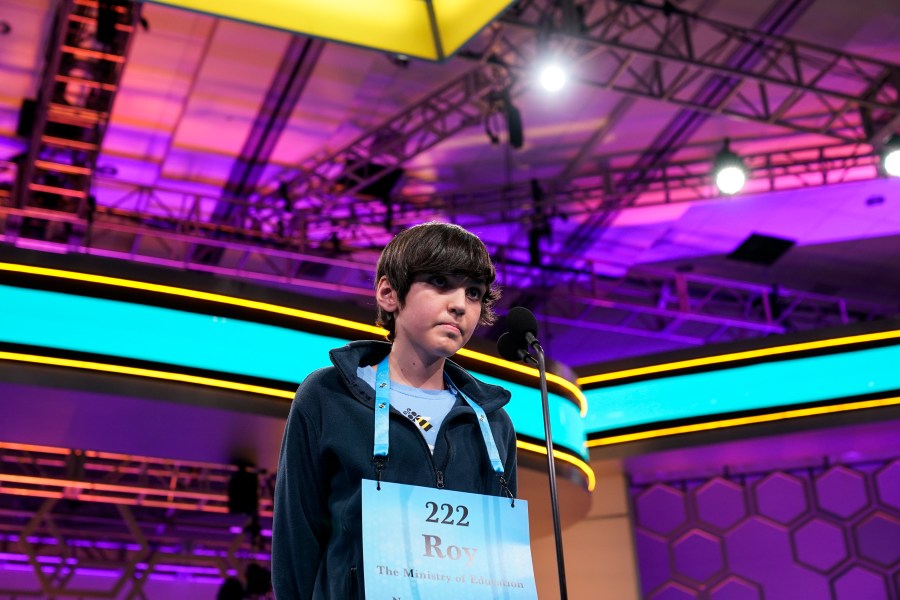 OXON HILL, Md. (AP) — The Scripps National Spelling Bee was rolling smoothly through the second day of its first fully in-person competition in three years. Then it transformed into the SAT.

An onstage vocabulary round during Wednesday’s semifinals introduced an element of randomness into the venerable bee, forcing spellers to demonstrate a different skill set and knocking out some of the bee’s most accomplished competitors.

Vivinsha Veduru and Roy Seligman, who tied for fourth place in last year’s bee: gone. Deetya Vuppala and Yash Shelar, the co-champions of this year’s expert-level SpellPundit online bee: also gone. All denied a shot at Thursday’s finals without spelling a word incorrectly.

“I thought it was tragic,” said Grace Walters, a coach to multiple previous Scripps champions.

For many spellers, the multiple-choice vocabulary questions took away their opportunity to use the skills they’ve honed over years of study: asking questions of the judges to help piece a word together; identifying roots; deducing which vowel makes the dreaded “uh” sound known as a schwa.

“The words that are sometimes asked may not necessarily be based on roots or easily decipherable, and so in that case it becomes a case of which kids are natural readers and have a lot of cultural capital, and which kids aren’t as culturally sophisticated,” said Scott Remer, a former speller who coached 21 competitors this year, including Saharsh and Deetya. “Some words you’re only going to pick up by reading newspapers, by reading certain books, and are not necessarily guessable.”

Yash was knocked out on “Stockholm syndrome,” a phrase that can’t be parsed via a speller’s expert knowledge of how sounds are constructed in various languages. Vivinsha didn’t know “ragout” was a stew. Deetya was given “ergogenic,” and Roy’s bid to become the first champion from The Bahamas ended when he was asked to define “rumbustical.”

“With the word meaning, it’s a crapshoot,” said Arthur Seligman, Roy’s father. “You and I know what ‘Stockholm syndrome’ means, but an 11- or 12-year-old?”

Chris Dominick, an excitable 14-year-old from Struthers, Ohio, illustrated the grab-bag quality of the vocabulary round when he was given “leitmotif” and exclaimed, “I know what this is!”

A reliable narrator, Chris didn’t make it through the next spelling round. He was given “sirtaki” — a Greek dance — and said, “OK, I think I’m going to get out on this one.” And he did, after guessing the word started with a “c.”

Vocabulary has long been part of the bee, but only on written tests. The bee’s new executive director, J. Michael Durnil, who took over in 2021, added it to the live spelling rounds when a test became impractical during last year’s mostly virtual, pandemic-altered competition.

“This is Scripps’ way of ensuring that the competition does not become about memorizing words like code,” Walters said. “Putting in a vocab segment, it almost forces intimacy with language because you have to know what those words mean.”

Although spellers had to answer a vocabulary question during Tuesday’s preliminary rounds, it was sandwiched between two words they had to spell. The semifinals, then, were the first time that so many spellers — 31 at the start of the vocabulary round — had to stand in front of the microphone and pick one of three possible answers on a screen in front of them.

Some knew the answers right away. Some didn’t, and had to guess — A, B or C. And that was that.

Vihaan, a 13-year-old from McGregor, Texas, who’s in the finals for the second time, was asked to define “vermilion” and noted that every multiple-choice option he was given was a color. He was shocked to see Roy knocked out.

“I know he’s a really strong speller. Probably stronger than me,” Vihaan said.

Harini, a 14-year-old from San Antonio, Texas, was one speller who kept her cool throughout, even when pronouncer Jacques Bailly made a rare flub, initially leaving a syllable out of “quinquefoliolate,” the word that got her into the finals.

Much like her mastery of language, Harini puts plenty of work into her onstage sangfroid.

“Even though I am stressed in the moments leading up to getting my word, as soon as I get my word, I just try to put myself into a thinking process where I can really feel calm,” she said.