For me there are few if any more devastating moments of cinematic heartbreak than the one that I experienced long ago in a galaxy far, far away—more specifically, on a muggy late spring day in 1999 in a pre-9/11 Manhattan.

When I and my fellow fans finally got to see Star Wars: Episode I—The Phantom Menace and witnessed firsthand the legendary characters reduced to the depth of paper dolls, the hackneyed dialogue, and most gutting, the trotting out of racist tropes, it was profoundly painful. So bad, in fact, that when it was rereleased 13 years later in muddy 3D, I remember driving past a billboard and almost crying: How could they be doing this to us again?

These still raw feelings came flooding back during the clip barrage that preceded the first episode of the new Disney+ series Obi-Wan Kenobi, which launched Friday May 27.

The forces behind the series—which takes place a decade after 2005’s Star Wars: Episode III–Revenge of the Sith and almost a decade before 1977’s Star Wars (think of it as Episode 3.33333)—perhaps had the innocent intention to catch us all up on the story. But the results feel like cultural gaslighting. Are we meant to pretend that our wounds are not still festering more than two decades later, or that the hideous rattail that Ewan McGregor, the star and executive producer of the new series, sported in the first prequel was okay at any time, or in any galaxy?

There are flashes of what makes Star Wars franchise work in the series’ second of six episodes, but if the first is reminiscent of classic Star Wars, it’s only because watching it feels like standing in an agitated line for nearly an hour while hoping to see something exciting. There isn’t much action, and one of the few exciting bits of lightsaber play is a not entirely necessary scene of school children being fired upon by invaders—the necessity of which seems even more dubious after “the recent tragic events” that Disney+ mentioned in a warning it added after complaints rolled in on the premiere day.

The Obi-Wan we initially meet is about as captivating as an Imperial Stormtrooper. He is unwilling to help a Jedi (played by Licorice Pizza’s Benny Safdie) who is being hunted by Inquisitors because he believes that the Jedi time has passed. Still, he keeps constant watch over the child Luke Skywalker, going so far as pestering the boy’s rightfully weary uncle (prequel-returnee Joel Edgerton) to start his training. He doesn’t read or have any friends outside of a camel-like creature he uses to commute to his day job. We don’t even get to see the interior of the cave in which he grumpily resides. You are left with the impression that they gave this guy his own show yet somehow made him less interesting than he was during the 20 minutes that Alec Guinness played him in the original.

By the end of the first episode, Obi-Wan is recruited by his old friend Senator Bail Organa (Jimmy Smits, also returning from the prequel to offer some kind-eyed gravitas) to rescue his 10-year-old adopted daughter Leia (Vivien Lyra Blair), whose precociousness only serves to get her captured by a bounty hunter, played by the Red Hot Chili Pepper’s Flea.

It’s all part of a plan by Reva, a Sith Inquisitor they call Third Sister, to trap the Jedi Master. (Reva is played by Queen’s Gambit breakout Moses Ingram, who does better with the physical aspects of her character than with the clumsy dialogue forced on her.)

But despite this disastrous launch, the series takes flight at the precise time that Obi-Wan does. Tracking the purloined princess with a device that looks like he picked up at the Tatooine Radio Shack in 1987, he thumbs a ride to Daiyu, a city planet that so perfectly embodies the retro futuristic funhouse groove that is distinctly and powerfully Star Wars-ian.

Star Wars works best when it gathers our most powerful myths, throws them in a blender, and hits puree. Once in Daiyu, the old movie serials that first inspired George Lucas are again an animating spirit. And the series adds a pinch from the Liam Neeson oeuvre as our hero must duel a city full of thugs to save a little girl, also borrowing perhaps more than a bushel from collected works of Ridley Scott, most especially Blade Runner. One of the most transfixing shots from cinematographer Chung-hoon Chung is of a rooftop laser battle viewed from across the city, subtly reminiscent of The Battle of Algiers.

Thankfully, the series eventually remembers that Star Wars is meant to be funny. Kumail Nanjiani exudes bemused delight as a pay-no-attention-to-the-man-behind-the-curtain huckster of faux Force. The interactions between Obi-Wan and young Laia have a certain screwball rhythm to them as well.

But it’s the final shot of Hayden Christiansen’s Lord Vader in episode two that caps things off. It evokes the Universal Classic Monsters of the Boris Karloff-Bela Lugosi era, but it’s from the Universal horror films of our dreams. Instantly we are brought back to the fact that underneath it all, Star Wars is a Gothic space opera about the all-consuming power of evil.

With Obi-Wan flying away and Anakin in seething stasis, the story is picking up thrust. I, for one, was finally able to stop looking backward at past transgressions of Star Wars—even if they happened a mere episode ago—and will be keeping my eye on the vast galaxy ahead. 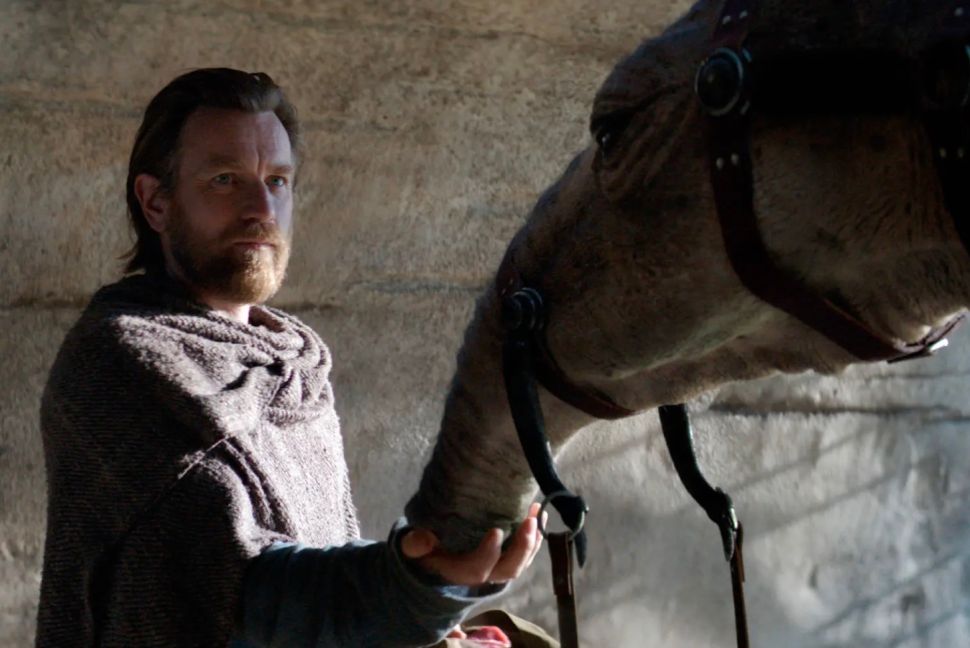