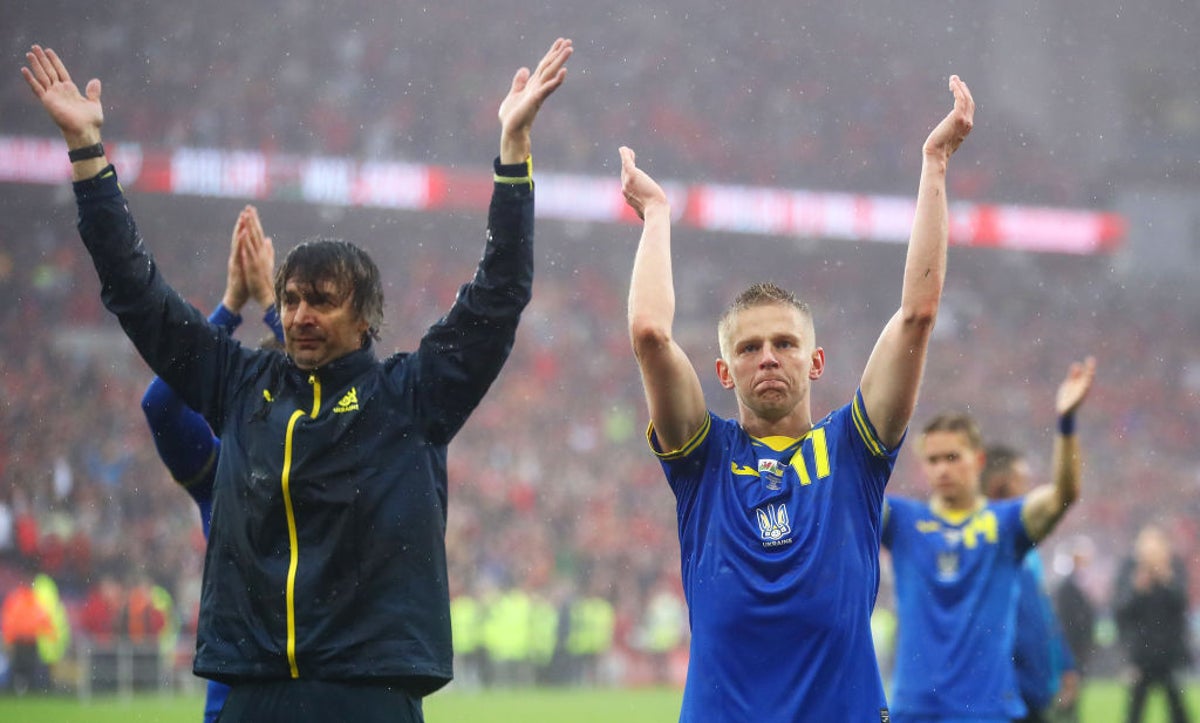 Gareth Bale interrupted his own celebrations. Wales had qualified for a first World Cup in 64 years and their talisman was found in the corner that housed the Ukrainian fans, applauding them. “We just wanted to show our appreciation to them and what they are going through as a nation,” reflected his manager, Robert Page. “Their team were outstanding in two games and their supporters as well.”

Ukraine were dignified and disappointed in defeat. Oleksandr Zinchenko was in tears. His manager, Oleksandr Petrakov, wished Wales well in the World Cup.

It could have been them and their presence in Qatar would have had a symbolic as well as a psychological value. The notion that sport and politics should not mix can often feel dubious. It has rarely been less true: sport was politics for Ukraine. When Petrakov apologised to his compatriots, unnecessarily but understandably, it was for a failure to score but, really, for something bigger, for an inability to send the sort of statement even Vladimir Putin would have found difficult to dismiss.

A series of misses, a string of saves from an inspired Wayne Hennessey and a freakish own goal from Andriy Yarmolenko assumed a greater context.

That Ukraine acquitted themselves superbly over a British double header is not in doubt. They had players who had taken refuge in train stations and basements when bombs fell. They all have families in their homeland.

Their CVs as footballers are studded with clubs in lands now occupied by enemy forces, from Shakhtar Donetsk to Zorya Luhansk to Sevastapol. Their past is another country. Their future is uncertain.

For the majority, who were based in their homeland, a 37-hour bus journey to Slovenia was the prelude to an extended training camp. They were footballers who, for the first five months of 2022, did not play an official game of football. They nevertheless showed a combination of technical excellence and heart. “We gave everything,” said Zinchenko. “We left everything on the pitch.”

Their cause lent a kind of finality to it. They are staring into the unknown.

“As to the future of the team, I can only say we have a game coming on the 8th against Ireland in the Nations League,” said Petrakov. Football owes a debt to Ukraine to render it as easy as possible for them to play fixtures, to try and qualify for Euro 2024 and the next World Cup.

Yet it remains to be seen if, when and where they can enjoy home advantage again. With players’ lives interrupted, it will probably become progressively harder for them to realise ambitions. They harnessed emotion and anger to produce two stirring performances, but the challenge is to do so again, and again. They are grasping for some normality in their dystopian world.

The Ukrainian FA have announced plans to restart their league from August. “I spoke with our president, Volodymyr Zelenskyy, about how important football is to distract,” Ukrainian FA president Andriy Pavelko said. It was almost the most glorious of distractions for Ukraine.

Yet there are obvious logistical difficulties in their bid to restore the fixture list. An attempt to erase Ukraine as a people, a culture, an identity will presume incorporate football. Petrakov, a man of few but powerful words, said: “You know what is happening in Ukraine, we have war waging all over the country, children and women dying on a daily basis and our infrastructure being ruined by Russian barbarians. The Russians want to hurt us.”

At 64, he had refused to flee Kyiv during the invasion. He had volunteered to fight. Instead he served his country another way. Under other circumstances, the 2019 Under-20 World Cup-winning coach might have been contemplating a golden generation for his country. Instead, much of his homeland is in rubble, being destroyed by toxic nationalism.

Ukraine instead brought proud patriotism on to the pitch. And, it is to be hoped, it will carry them back into major tournaments again.

Musk and Dimon warn of heavy weather, but for whom?