Planned for decades, with a release postponed for two years during the Covid pandemic, Top Gun: Maverick, the eagerly awaited sequel to the late Tony Scott’s 1986 action blockbuster Top Gun (a movie that didn’t need a sequel) is here at last.  It’s noisy, derivative, contrived and more focused on adrenaline-pumping aerial antics by pec-flexing alpha males than anything you might call narrative insight, freshness or character development (translated, that means guaranteed boffo box-office) it is, in short, not my kind of movie.  That said, I must hastily add that even if it is not always logical, coherent, or believable, it is undeniably exhilarating, suspenseful, well-acted and loaded with sequences of fabulous aviation combat.  There is still something to be said for skillful, old-fashioned filmmaking, and director Joseph Kosinski has done plenty of it here.  The result goes with popcorn like butter, and I liked it in spite of myself.

Tom Cruise, an experienced pilot in real life who co-produced and does his own dangerous stunts without much computer-generated help, is back as Pete Mitchell (call sign “Maverick”), with Val Kilmer in a brief cameo as his old nemesis “Iceman.”  Iceman made it to the rank of admiral, but after 30 years of service, Maverick is still stuck in the lowly rank of captain. When the movie opens, Maverick has risen to the top of the aerial food chain and been working as a Navy test pilot, but he’s fired again for disobeying orders by his commanding officer (Ed Harris), who says “Your kind is headed for extinction.”  Is he kidding?  This is Tom Cruise.

Before he can file for unemployment benefits, the Navy recruits him to return to his old stomping ground, the Top Gun special training program dedicated to turning out ace pilots, where he will guide a group of 12 talented young people on a mission to destroy an enemy air strip by flying at dangerously low altitudes through winding canyons that make survival a challenge.  But the Navy doesn’t want him to fly.  They want him to teach.  Only a fool would expect Maverick to stay on terra firma when the aerial dynamics are so tempting, so you mostly wait around to see how long it will take for him to grab the stick and head for the clouds. To stretch the plot beyond Screenwriting 101, this group — which he must whittle down to six—includes a new adversary with the call sign “Rooster” (Miles Teller).  Rooster is the son of Maverick’s old flight partner Goose, who died during a maneuver for which Maverick still holds himself responsible.  The tension that builds between Maverick and Rooster is one of the film’s subplots, but nothing is as important in a Tom Cruise vehicle as showcasing the numerous sides to Tom Cruise, which he plays with love-me-unconditionally Technicolor smiles as wide and white as a picket fence by Benjamin Moore.  (He can keep his millions; I want his dentist!)  The point of the movie—in fact, the reason for it—is to show how there is still much to be learned from the “old-timers.”  The arrogant new pilots think Maverick is a has-been — there’s nothing he can teach them they don’t already know.  What follows is more than two hours of proving them wrong, and he has less than three weeks to whip the team into shape.  Of course he single-handedly proves the mission can be completed against all odds, breaking all the rules and risking a court martial from his hostile new c.o. (Jon Hamm.)  The minimal dialogue by Ehren Kruger, Eric Warren Singer and Christopher McQuarrie, consists mainly of the kind of forced and annoying techno-jargon that wreaks havoc on coherence, but as it chronicles the pilots cynicism, resentment, jealousy and competition, the script reveals some moments of tension and maturity, too.

There’s so much to watch that you forget about the running time, as Maverick takes time to sail boats, fly myriad makes and styles of aircraft without even reading a manual, rides motor cycles (without a helmet, natch) and finds romance with Jennifer Connelly, replacing Kelly McGillis in the sex department, as  an old flame who is now a bartender.  It all leads up to a big, eardrum-shattering finale with Maverick and Rooster, now his wing man, in a stolen F 14 from World War Two so outdated it doesn’t even have an operating manual to ignore, pursued by modern fighter planes.  Still, when all is said and done and the interminable credits roll, this is a movie that honors old movie traditions and cements the superstardom of Tom Cruise with unimpeachable power. Just about everything else has changed since he was a Top Gun rookie in 1986, but he’s the same taut, toned and age-resistant hunk who knows how to give his fans what they pay for.  Including a theme song by Lady Gaga, Top Gun: Maverick  gives them a little bit of everything.

Observer Reviews are regular assessments of new and noteworthy cinema. 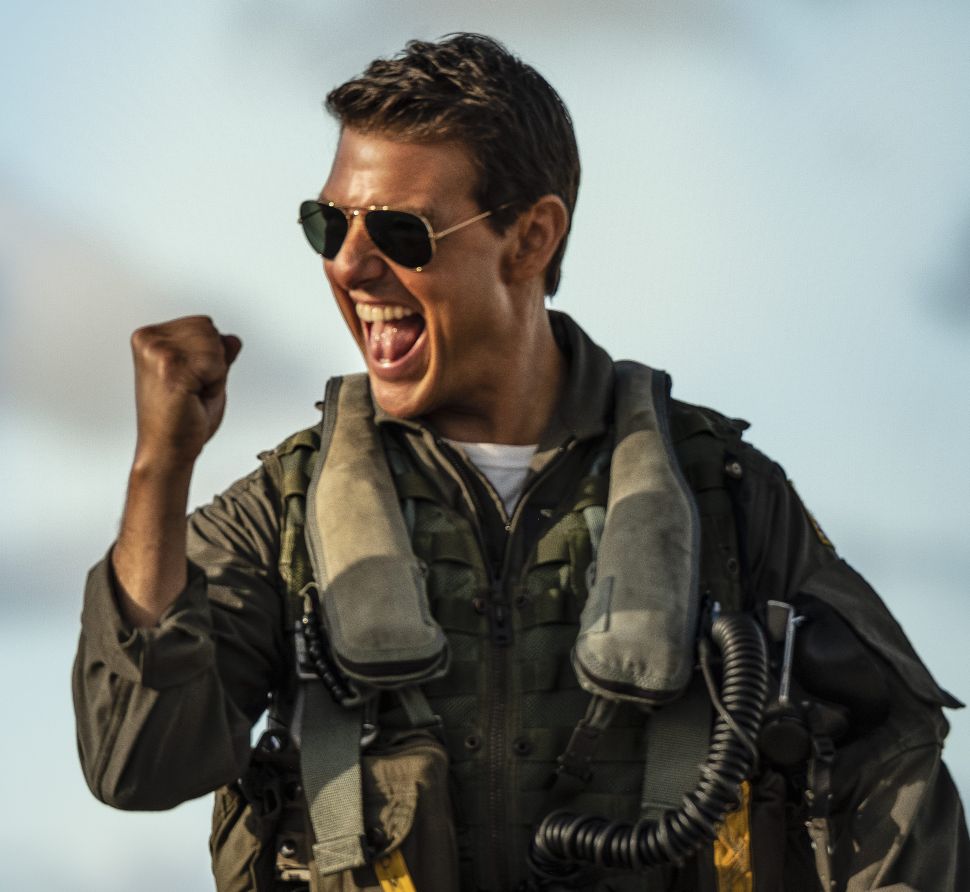