Sex Pistols aim to give queen's jubilee a touch of punk 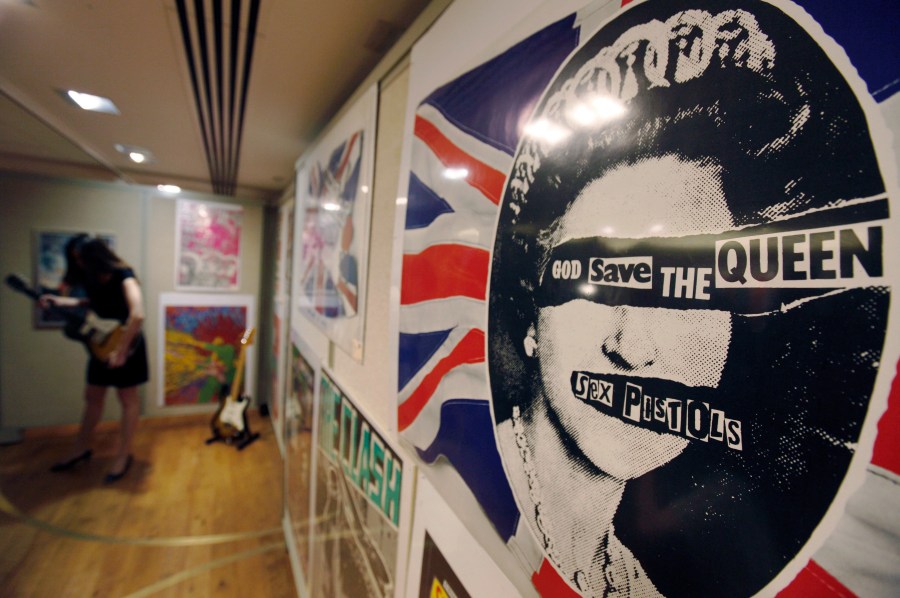 LONDON (AP) — In Britain, there are several traditional elements to a royal anniversary: pageants, street parties, the Sex Pistols.

Queen Elizabeth II and the Pistols have been linked since the punk pioneers released the song “God Save the Queen” during the 1977 Silver Jubilee that marked the monarch’s 25 years on the throne.

The anti-authoritarian anthem — not to be confused with the actual British national anthem of the same name — has been re-released for Elizabeth’s Platinum Jubilee, or 70 years as queen. It’s one of a raft of cultural tie-ins — critics might say cash-ins — spurred by the royal milestone.

Members of the band that rhymed “God save the queen” with “fascist regime” and “she ain’t no human being” have mellowed over the years.

“I see all the flags are up everywhere,” Jones said while visiting London from Los Angeles, where he has lived for more than 30 years. “I mean, it’s entertaining stuff. Tourists just absolutely love it.”

It’s a far cry from 1977, when “God Save the Queen” was launched on the jubilee weekend with an anarchic Sex Pistols gig on a riverboat — the Queen Elizabeth — that was cut short by London police.

The song sparked outrage; members of the band were attacked in the street and it was banned from radio or television airplay. It nonetheless reached No. 2 in the charts, below Rod Stewart’s “I Don’t Want to Talk About It” — though rumors persist that the Sex Pistols’ song actually sold more copies.

The band’s record company hopes it hits No. 1 this time, though it failed to dent the charts when rereleased for the queen’s Golden Jubilee in 2002 and Diamond Jubilee in 2012.

Other cultural institutions are also getting in on the jubilee action. Auctioneer Christie’s is selling two Andy Warhol screen prints of the queen. Rival Sotheby’s is offering a lightbox portrait of the queen by Chris Levine and Jamie Reid’s now-iconic artwork for the Pistols’ “God Save the Queen,” showing the monarch’s face covered in ransom-note lettering.

Many museums and galleries have special exhibitions and events. Some are quirky, such as a jubilee-themed Drag Queen Bingo that London’s Horniman Museum is holding.

Britain’s monarchy has a sometimes awkward, but increasingly close, relationship with popular culture. Who can forget the queen’s scene with Daniel Craig’s James Bond during the 2012 London Olympics opening ceremony, which culminated in a stunt double for the monarch skydiving into the stadium?

Pop music — nothing too edgy — is playing a central part in this week’s jubilee festivities. A concert outside Buckingham Palace on Saturday will feature artists including Elton John, Alicia Keys, Duran Duran and Diana Ross, while Ed Sheeran is due to perform at the main jubilee pageant on Sunday.

Television series “The Crown” has mined the queen’s long reign for drama, and blurred the lines between fact and fiction for millions of viewers. The Sex Pistols are having their own fact-meets-fiction moment with “Pistol,” a Danny Boyle-directed miniseries based on Jones’ memoir “Lonely Boy.”

The Sex Pistols split in 1978 after releasing one album. Jones says he’d “just had enough. It was so dark and horrible at that point.”

But he is proud of the band’s legacy, even if he sometimes sounds weary talking about it.

But, Jones added: “I don’t particularly listen to punk rock anymore. My musical tastes have changed a lot over the years, you know, and I’m 66 years old. I’m not a kid anymore. I think it would be a bit silly if I was still flying that flag.”

Pistols bassist Sid Vicious died in 1979 at age 21, but the surviving members have reunited sporadically for concerts. Lydon and his former bandmates faced off in court earlier this year when the singer tried to stop the group’s music being used in the “Pistol” TV series.

A further musical reunion — perhaps for the queen’s 75-year anniversary in 2027 — seems unlikely.

Follow all AP stories on the British royals at https://apnews.com/hub/queen-elizabeth-ii

Why are wages not keeping up with inflation?