The US dollar is expected to extend its gains, increasing speculation that governments will stage unusual market interventions to drive up the value of the currencies on the losing end of the trade.

About 45% of 795 respondents to the latest MLIV Pulse survey expect an orchestrated attempt by major world powers to weaken the dollar, even though the US has moved to tamp down talk of such a move. Nearly as many said they expect Japan to step up its pricey efforts to shore up the yen by itself, without the support of others. Two thirds of respondents see the Bloomberg dollar spot index climbing to new highs over the next month. The dollar has surged as international investors seize on higher US interest rates or seek a haven from market turmoil, including in crisis-ridden UK and emerging markets. The rally is exaggerating the economic difficulties of nations around the world by pushing up prices of imported food and fuel. That’s putting further pressure on many central banks, which have been raising interest rates in an effort to tamp down the surge in consumer prices.

The unstoppable dollar is also a drag on American corporate earnings by reducing the value of money made abroad. Almost 90% of survey respondents expect third-quarter earnings to show more impact from the dollar than a quarter before.

“The dollar’s uptrend in the near term is going to persist,” said Joseph Lewis, head of corporate hedging and FX solutions at Jefferies LLC. “In the long term, the world will shift and some of the other currencies will bounce back. But human behaviour tells me that it feels like being in the US is just a better place now.”

The dollar has been pulled higher by the Federal Reserve’s most aggressive policy tightening since the early 1980s, which has pushed up US bond yields. The Bloomberg dollar index has risen 14% this year, with the currency gaining even more against the pound and yen. The pound collapsed to a record low in late September due to the concerns over the UK’s deep tax-cut plans.

Japan spent $19.7 billion on its first intervention since 1998 to bolster the currency, but the surprise move didn’t bring long-lasting results. Unlike the Fed, the Bank of Japan has been keeping interest rates low.

“There’s a big divergence between central banks’ monetary policy with the Fed being very hawkish and some others actually dovish,’’ such as the Bank of Japan and People’s Bank of China, said Nancy Davis, founder of Quadratic Capital Management. “It’s making the dollar incredibly strong.”

President Joe Biden’s administration has little incentive to weaken the dollar, since it could put further pressure on US inflation. And White House National Economic Council Director Brian Deese said he doesn’t expect any agreement among major economies to counter the currency’s strength.

But MLIV survey respondents said a sharper runup could spark such a move.

The last time there was a major round of coordinated action to weaken the dollar was in the 1980s, when the UK, France, West Germany, Japan, and the US agreed to act in concert in the effort dubbed the Plaza Accord. Japan in 2011 was able to secure Group of Seven support for intervention after the tsunami and during the Asian financial crisis. G-7 members also cooperated to shore up the euro in September 2000.

Any potential coordinated currency intervention could lead to significant bounces in most currencies versus the dollar. In the two months following the Plaza Accord, the dollar fell by over 10%, with the total decline over the next two years peaking at almost 50%. Currently, many investors have taken long positions in the dollar, and an intervention to weaken it would trigger a wave of selling.

The pound and the euro are already in a “semi” currency crisis and eventually, we “might even need some central banks’ coordination if this continues,” Adrian Zuercher, head of global asset allocation at UBS Global Wealth Management, told Bloomberg TV in an interview.

The strong dollar is also causing harm to some stock investors. Nearly 90% of respondents said the impact will be more apparent in third-quarter results. 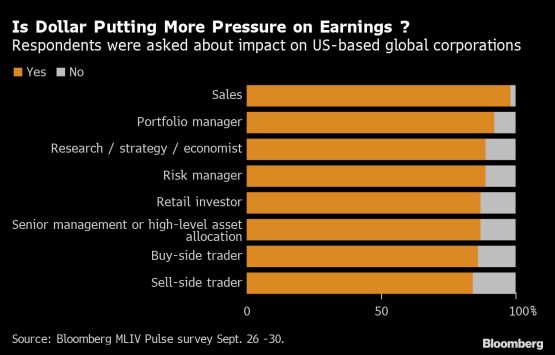 Microsoft Corp. warned that a stronger greenback was hurting its bottom line when it cut its outlook in June, just ahead of the second-quarter earnings season. During that quarter’s earnings calls with companies in the S&P 500 Index, analysts and executives mentioned the dollar more than 1 000 times, the most in three years, according to data compiled by Bloomberg.

“Hedging rates and FX is top of mind for people,” Jefferies’s Lewis said. “For most companies, a 5% or 10% move in a currency is something they can ignore, but a 20% move is something they kind of have to contend with.”