Q&A: Mark Rylance on his still-evolving life in movies 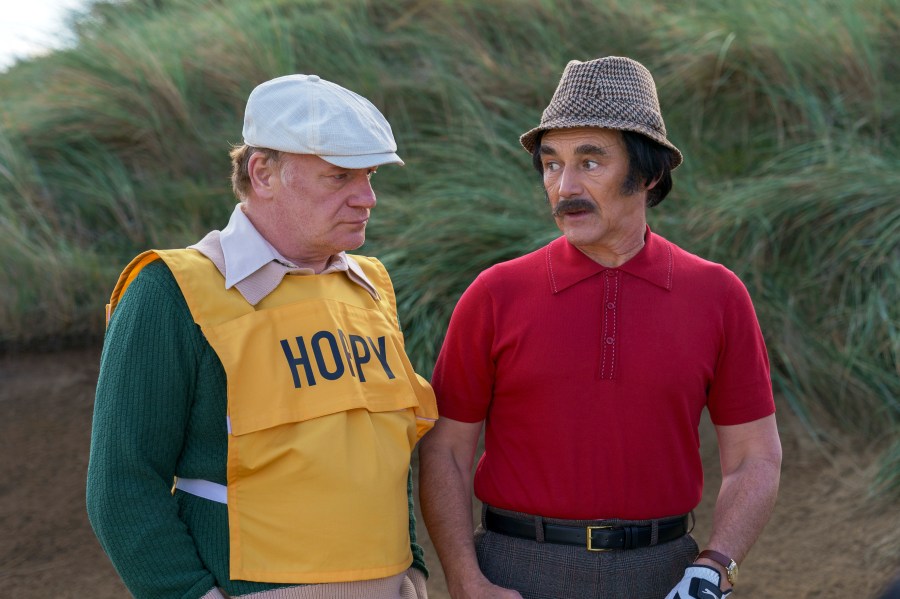 NEW YORK (AP) — With London’s stages closed for much of the pandemic, Mark Rylance — one of the theater’s most soulful actors and a leading interpreter of Shakespeare — made six films.

They span a wide gamut. A tech billionaire in Adam McKay’s apocalypse satire “Don’t Look Up.” Satan in Terrence Malick’s upcoming “The Way of the Wind.” Luca Guadagnino’s “Bones & All.” A tailor in the chamber-piece thriller “The Outfit.” Rylance even acted for free in a student film.

Rylance also starred in a quirky and charming sports movie: Craig Roberts’ “The Phantom of the Open,” which Sony Pictures Classics releases Friday in theaters. The 62-year-old actor stars as real-life amateur golfer Maurice Flitcroft, a former shipyard crane operator of modest golfing skill whose persistence in entering the British Open earned him the reputation as the world’s worst golfer. To Rylance, Flitcroft — a kind of folk hero to imperfection — stood for irrational dreams and amateur pluck.

Rylance has long seen acting in sports terms. He compares his own instinct for it to how a professional soccer player is drawn to kicking a ball. Golf isn’t really his sport, though. Courses in tightly populated urban settings, he thinks, should be turned into parks. Rylance prefers volleyball, which he plays as a pre-show warm-up with castmates to prepare for the improvisations of a play.

“All acting is basically passing a ball of energy of some kind between people,” Rylance said in a recent interview by Zoom.

And for Rylance, the hurly burly of theater — “a dance with the audience,” he calls it — has always most propelled him as an actor. Rylance is currently in the midst of a 16-week run revival of “Jerusalem,” reprising his defining role as Johnny “Rooster” Byron in Jez Butterworth’s Tony-winning play about a clash between outsiders and authorities and a soon-to-be bulldozed encampment.

On his day off from the stage, Rylance reflected on “The Phantom of the Open,” “Jerusalem” and his still-evolving relationship to film acting.

AP: You had acted in films before Steven Spielberg’s “Bridge of Spies” but that 2015 movie began a new chapter in movies for you, and raised your profile in Hollywood. How has your relationship to film work changed since then?

RYLANCE: For someone who loves acting to be in a play where I’m acting for three hours and in the company of the actors for five and a half, six hours — because there’s a two hour vocal warm-up, there’s lovely games of volleyball, there’s all the fun of a social dressing room, because I don’t cut myself off. It’s a society that’s just so much fun. Whereas film, now even more with COVID, you’re just locked in a caravan. The more famous you get, at least in America, the less confident crew people are to talk with you, or even look you in the eyes. It’s weird. And you get maybe one take, two if you’re lucky. I adore watching films. I just adore watching films. Most evenings I will watch something. I’m still discovering things. Joel Coen has just introduced me to De Sica’s films and that’s led me to rediscover Sophia Loren who I had only seen in English-speaking films. It, of course, wasn’t her first language so you got a muffled version of her. But when you see her in the De Sica films like “Two Women” or “Yesterday, Today and Tomorrow,” she is just diamond.

AP: You made six films during the pandemic. Was that so you could keep acting while theaters were closed?

Rylance: Yes, partially. I guess I was available. Also it was just a series of scripts that came in that I really liked, including some students that wanted to make a 15,000-pound film in Gloucester. I thought: “What the hell, that sounds like fun. I’m not doing anything.” I think I’m getting better at it. I still want to be doing less. I still look at (Robert) Mitchum and Steve McQueen and many, many others, many women, too, and admire how little they do, how much they trust the story. Maybe in Mitchum’s case he can’t give a (expletive) really and that can be quite a helpful thing, actually. It makes you quite magnetic. I can’t do that. I do care about the films that I’m in. When I watch “The Outfit” or the little bits I’ve seen of “Bones,” I still want him to do less. I still want me to hold more cards to my chest, not play quite as expressively as I do.

AP: What attracted you to “The Phantom of the Open”?

RYLANCE: Oh, the screenplay. The story. The fact that it’s a true story. He reminded me a bit of Jimmy Stewart’s character in “It’s a Wonderful Life,” in that he had done so much to encourage and help other people. And there was a bit of Don Quixote in him, too. The way he just never accepted other people’s opinions of himself. He would hear their opinion and then think, “Well, they must be crazy. I know who I am and I know what I did today.” I found that very charming and I thought if I could just get a little bit of that. I mean, I do have quite a bit of that. I’m not overwhelmed by trying to please other people, but I do hold criticism to heart, particularly if it’s correct.

AP: Some might have interpreted Flitcroft as more of a trickster or con-artist but you portray him sincerely.

RYLANCE: Well, go on YouTube and check it out. There’s a wonderful morning interview he did and I must have watched it 150 times looking for that: “You can’t really be serious. You must be taking the piss.” But I can’t find a crack in his sincerity and his self-belief. I can’t see a wink or a twinkle that suggests he’s taking a piss. All actors have their own indigenous fool or clown. My clown is a particularly sincere fool. That’s something I have access to and have used. That’s partly what I bring to the squad.

AP: Why is that your personal clown?

RYLANCE: I’m sincere and I’m a fool. (Laughs) It’s as simple as that. My family regularly laughs at my foolishness, my sincere foolishness. And my foolish sincerity but that’s the more tragic side of my character.

AP: You’ve said that you might like to keep returning to Rooster in “Jerusalem” every decade. Why?

RYLANCE: I had the good fortune to return to Hamlet a number of times in my life. At 16, at 28, 29, 30, 31 — those were quick returns — and then again at 40. Gradually, my understanding of Act I decreased and of Act V increased. I read about older actors and actresses before there was filmed acting work. If they came up on a performance, a play that was natural to them, or struck the pulse of the nation, they would revive it. I always imagined that a film star, like Jimmy Stewart in “A Wonderful Life,” would have been reviving that every few years in the way we revive it by watching it at Christmas time. I was interested to do that with “Jerusalem.” There was a little bit of risk that it would be bound by its own time. But the state and corporate control of humanity has only gotten worse in the last 10 years, and the hunger of the public for their indigenous soul in their wildness and connection with animals and plants and all the things we are undeniably connected to but the corporate world and the state world would like us to rely on patented solutions to our needs — that situation is even stronger now. I fear probably 10 years from now it will be same, it will be even worse.

AP: Was playing Rooster again like putting on an old sweater or do you go through your process all anew?

Rylance: We had five weeks rehearsal. We had eight or nine new members of the cast, and the people returning are all different. We’re all different. It’s not like a reprint of the film. It’s a live event. It’s like preparing an English football team for a season. You’re not just aiming for one take that can then be used. You have to create it live every evening, the way Miles Davis and the great jazz artists never just played what they played last night. I mean, I’m aware of how much I’ve learned in the last 10 years. I actually feel stronger vocally and physically and psychologically then I did 10 years ago.

RYLANCE: Grief. Loss. A lot of work, a lot of life. I’m 62 now. You get older and you see more the essential patterns going on and you differentiate between what’s essential and not.

Ekurhuleni, Joburg want tariff increases of up to 11%