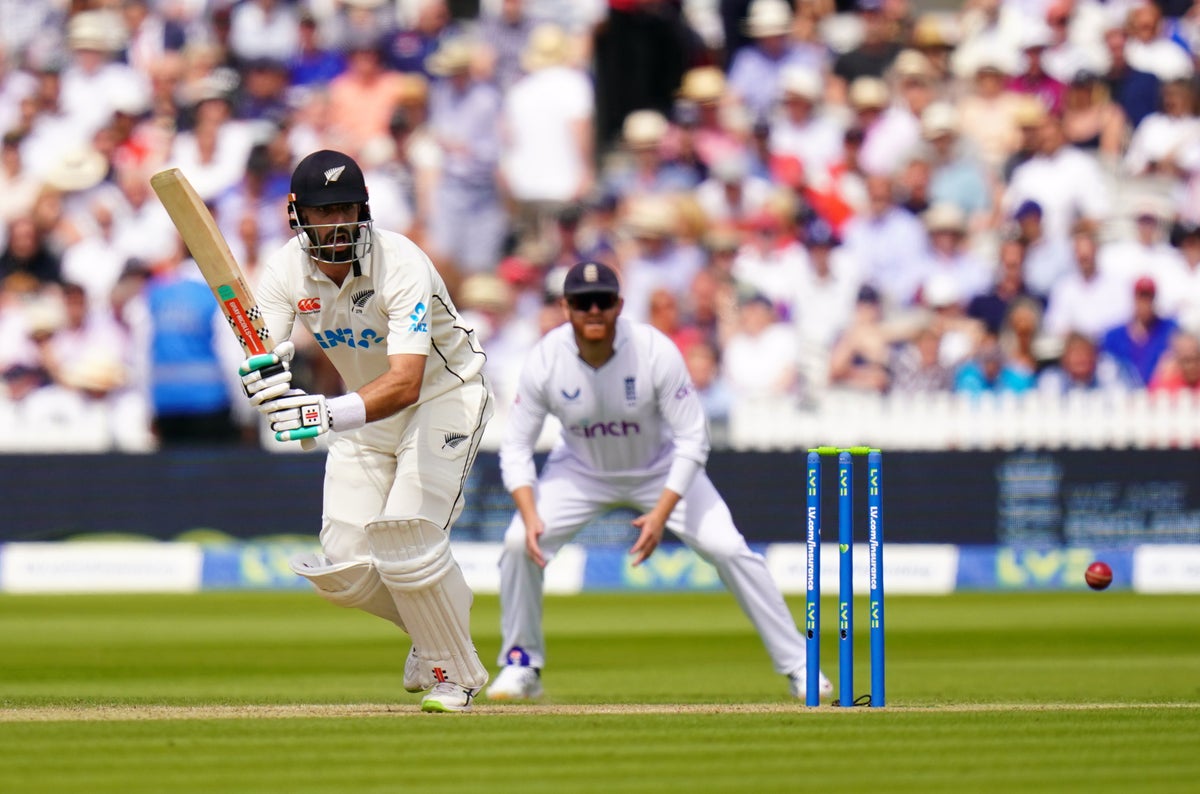 England’s inspiration ran dry on day two of the first Test as an emphatic near double-century stand between Daryl Mitchell and Tom Blundell put New Zealand in control at Lord’s.

After a frenetic first day that saw that saw 17 wickets fall, another seven were added to the tally before the Black Caps’ fifth-wicket pair settled in for what could go down as a match-winning stay.

Coming together with their side struggling at 56 for four – just 47 ahead – they put on an unbroken 180 to move their side 227 ahead at stumps. Mitchell ended the day on 97 not out, three short of a well-deserved century at the home of cricket, with Blundell on 90 in an imposing total of 236 for four.

Their partnership was an exemplary display of calm accumulation, with the pitch flattening out and the home attack unable to whip itself into action.

After a strong start, the core seam unit struggled to part the Kiwis’ middle-order pairing, who shut down the vastly experienced James Anderson and Stuart Broad before finally showing impressive debutant Matthew Potts that Test cricket was not quite as simple as he might have thought.

The Durham quick began by removing visiting captain Kane Williamson for the second time in as many days and took his match tally to six when opener Tom Latham nicked off.

New captain Ben Stokes was expensive at more than five an over and there was an inconclusive first look at England’s first-ever concussion substitute Matt Parkinson.

Having raced down the motorway from Manchester to replace Jack Leach on Thursday afternoon, the Lancashire leg-spinner finally got a long-awaited chance to prove his abilities to bamboozle county batters could translate to the highest level.

He started nicely, landing his first few leg-breaks in solid areas and getting a little bite from the pitch, but Mitchell and Blundell’s initial struggles to find their timing against him soon disappeared.

Renowned for being a consistently accurate wrist-spinner, as well as a purveyor of the occasional magic ball, Parkinson was guilty of tossing up a couple of glaring wide full-tosses and did not create much drama as he sent down 14 wicketless overs for 43.

England had earlier climbed from 116 for seven overnight to 141 all out, building a slender nine-run lead.

That left little margin for error, but Anderson once again set a superb tone, finding Will Young’s outside edge with the first ball of his second over.

Williamson’s recent lack of runs continued as he once again failed to make an impression, nicking Anderson in front of the slips before he tried to punch Potts off the back foot and fed Jonny Bairstow a waist-high catch in the cordon.

Potts saw off Latham just before lunch, picking up another thin edge and adding another layer to a highly encouraging first appearance.

The afternoon session finally saw the game revert to something approaching a regular Test match rhythm, as New Zealand dug in to add 90 for the loss of just one wicket. Devon Conway was the man to go, poking Broad into Ben Foakes’s gloves, before Mitchell and Blundell picked up the slack.

Mitchell cut and pulled well, showing enough intent to allow Blundell to find his feet at a quieter pace. Stokes’s introduction raised the run rate, despite some prodigious reverse swing, and when Parkinson finally got his hands on the ball, New Zealand were 90 for four.

For a player whose last four outings have been T20 appearances in the Vitality Blast, he was admirably short on nerves as his first delivery dipped nicely and turned away as Blundell defended.

Parkinson has been dogged by suggestions that he is too slow through the air to be a real danger at Test level and the batters did appear to need a few sighters before getting to grips with his style.

He did not concede a boundary until his fifth over, but there was a lack of jeopardy too as England’s hunt for a breakthrough began to labour. Blundell had successfully played catch-up and beat his partner to the first half-century of the match, getting there in 101 balls with a compact square drive off Potts.

Mitchell did not have to wait long to follow, getting there with a nudged single off Broad, and it was increasingly apparent that the game was being shaped by two cool-headed knocks.

There were pockets of activity, with five boundaries in the space of three overs as Mitchell took on Anderson and Blundell did the same to Broad, but it was the methodical manner and chanceless play that impressed most.

England’s own unreliable batting line-up will need to show plenty of the same qualities to get anywhere near a successful chase as the game moves towards its conclusion.

Hungary vs England live stream: How to watch Nations League fixture online and on TV tonight