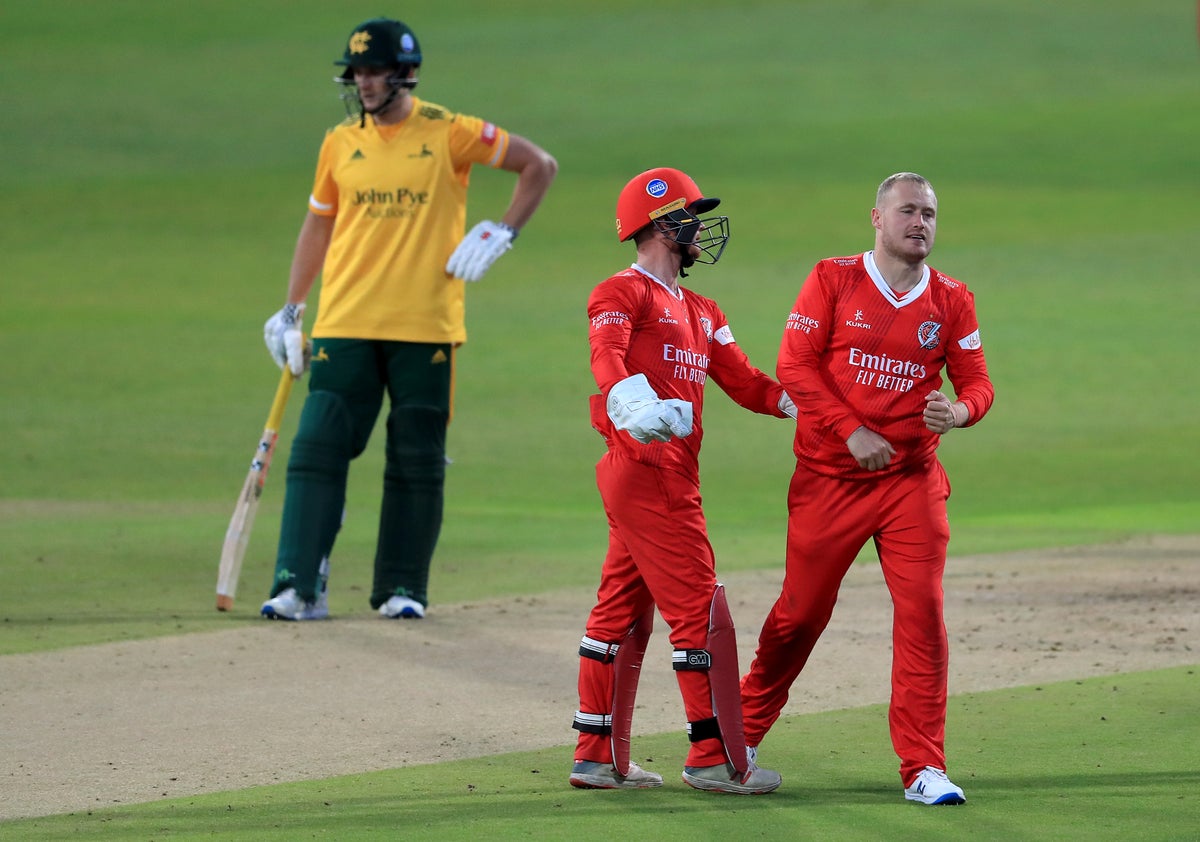 Matt Parkinson took a break from England duty to help Lancashire to another Vitality Blast victory and in the process secure family bragging rights.

Two wickets for the leg-spinner, who made his Test debut as a concussion substitute against New Zealand last week, helped the Red Roses dismiss hosts Leicestershire for 135.

Brother Callum Parkinson was one of two scalps to Danny Lamb, with Lancashire’s other spinner Tom Hartley also able to nab a brace of wickets in a fine team bowling display.

Lewis Hill hit 50 for Leicestershire but Phil Salt and Steven Croft put on 81 for the second wicket to ensure the away side triumphed by seven wickets and now top the table.

The other North Group fixture of the night saw Tom Taylor star with the ball for Northamptonshire Steelbacks before helping with the bat to see them over the line by five wickets at home to Derbyshire.

Taylor’s four for 27 saw visiting Derbyshire settle for 151 for nine with Wayne Madsen top-scoring with 37.

Josh Cobb’s 70 was the backbone of Steelbacks’ chase but Rob Keogh (28 not out) and Taylor, who finished unbeaten on 12, ensured the hosts got over the line during the 19th over.

Defending champions Kent saw their sorry campaign continue after they suffered a second defeat of the season to Essex in South Group.

Alex Blake hit 38 but received little support, with Sam Cook the pick of the home bowlers with two for 14 in a fine effort to keep Kent to 130 for nine at Chelmsford.

Four sixes by Michael Pepper saw the Essex youngster score exactly 50 as the 2019 winners raced to victory in the 16th over with seven wickets in hand.

Another century stand between Ben McDermott and James Vince helped Hampshire ease to victory away to high-flying Middlesex.

After the home side were restricted to 142 for seven at their rural Radlett venue, following Liam Dawson’s exceptional figures of three for 14, the visitors raced to success with eight overs to spare.

McDermott smashed a 30-ball innings of 83 while captain Vince was there at the end on 54 not out after the pair had put on a club best of 132 for the first wicket – breaking the record they set on Sunday against Sussex.

James Bracey struck 63 to inspire Gloucestershire to a five-wicket win at Glamorgan.

Wicket-keeper Bracey hit a third half-century in the sprint format before he was dismissed with the victory target of 159 within touching distance.

It was not the highest score of the contest in Wales with Glamorgan opener David Lloyd smashing 68 at the start of their innings, but they could not kick on and their final total of 158 for eight would prove to be not enough.

Brownstein: Making ‘Borscht, Not Warscht’ a mantra for Ukrainian food-fundraiser