A local firm could make Calgary home to the tallest building in Western Canada once again, as part of a massive downtown project the likes of which the city has not seen in years.

Triovest filed a development permit April 21 with schematics for a mixed use three-tower complex on Stephen Avenue. The project would eat up almost the entirety of 7th and 8th avenues S.W. between Centre Street S. and 1st Street S.W.

Architectural drawings submitted to the city include a 66-storey condo tower, a 54-storey rental tower and a 24-storey office tower.

Triovest declined a request for an interview, but issued a statement.

“Our approach to real estate has always been to improve and enhance properties to achieve their full potential,” Ryan Schott, vice-president of marketing and communications, said in the statement. “This approach includes a robust exploration of potential community, social and economic benefits.”

No timeline was given for the project.

The building is being designed by local firm Gibbs Gage Architects, which declined to comment.

The Stantec Tower in Edmonton, completed in 2019, is the current title holder at 66 storeys and 251 metres. Upon its completion, it bumped Calgary’s Brookfield Place East (56 storeys, 247 metres, completed in 2017) from the top spot.

Included in the schematics for the proposed Calgary project is retail space at ground level, an 18-storey hotel and five levels of underground parking.

The application is still under review and a land-use redesignation would be required for the site.

While Mayor Jyoti Gondek said she is encouraged by the potential for this level of private investment downtown, she added there is still a long way to go to approval.

“I think anytime we have a major application come to us regarding our downtown is absolutely a sign of faith that we are in recovery mode,” she said. “When we invest in ourselves as our city has done — we’ve committed a quarter of a billion dollars to our downtown recovery — private investment coming in and taking a chance on our city is a very big deal.”

The block has long been the source of rumoured revitalization, with other projects not coming to fruition. Triovest purchased the historic property in 2016. Previous owner Heritage Property Corp. had announced a $30-million project in 2009, which would have restored storefronts and built an automated parking garage, but it never materialized. 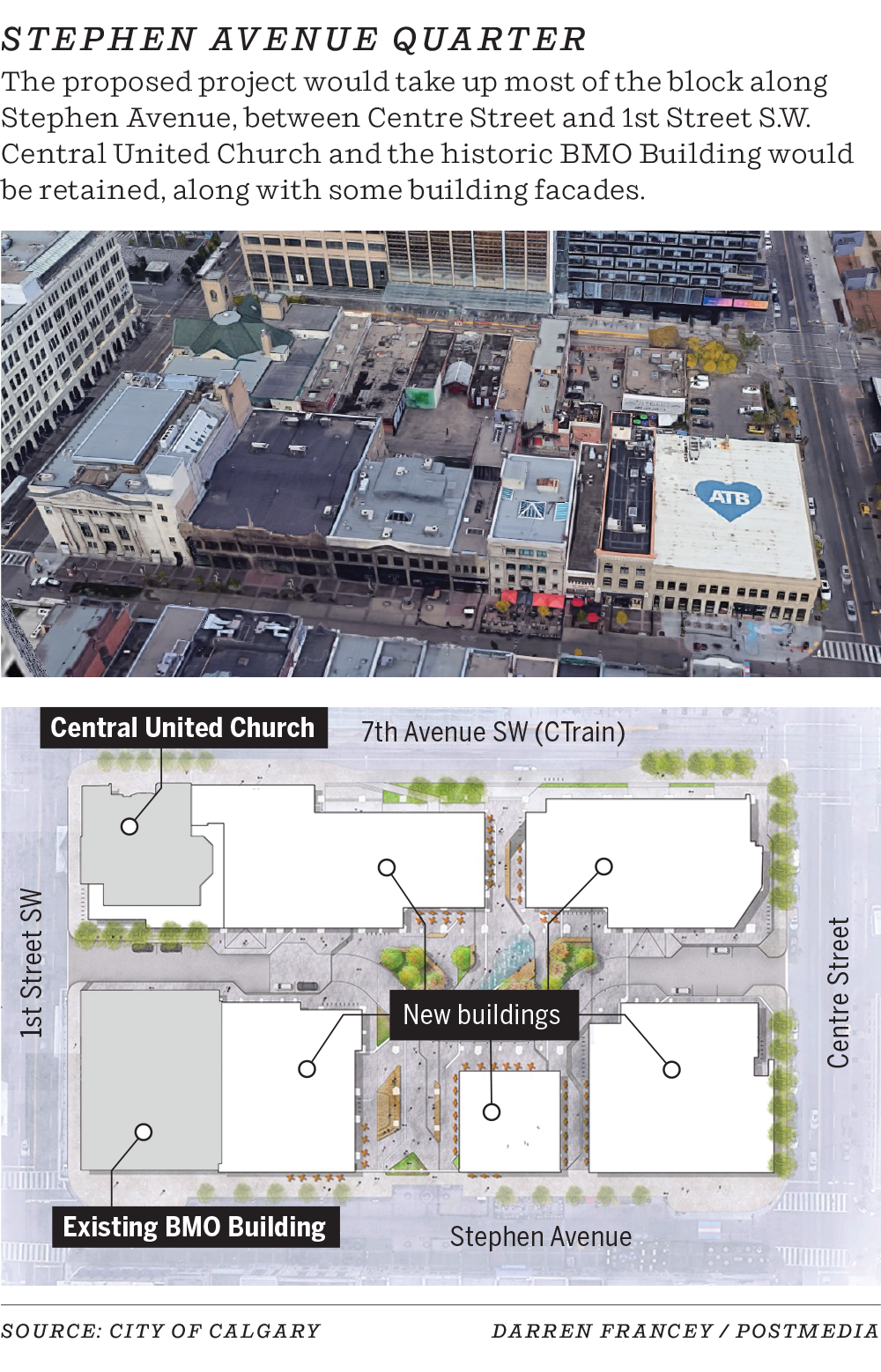 This project is designed to maintain the historic storefronts but will also not infringe on the property of Central United Church, at 131 7th Ave. S.W., or on the historic BMO building at 140 8th Ave. S.W., which currently houses a GoodLife Fitness location.

Coun. Terry Wong, whose Ward 7 includes the area, said it is important that whatever is developed, the history and heritage of Stephen Avenue Walk is maintained.

“This is something I take pride in, is our history and heritage, and we don’t want to lose that,” he said. “We’ve seen a number of implementations where that has been done very effectively, but at the same time building very modern contemporary sort of buildings.”

The complex would bring an infusion of new office space downtown as Calgary has been struggling with high office vacancy rates for seven years. There is currently about 14 million square feet of vacant office space, about a third of the downtown’s total stock.

Key to the project is the residential towers, which would change the city’s skyline, even potentially blocking views of the 59-storey Telus Sky, which has become a focal point for many. Several current downtown office towers are being converted — with the aid of city, provincial and federal grants — to affordable housing, seniors housing and other applications.

White also had the north residential tower with 390 proposed units, the south tower with 402 units and the hotel with 176 rooms.

The mixed-use design of the building has the potential to bring more people downtown to live, work and play — viewed as a critical element to downtown revitalization.

— With files from Stephanie Babych

The Teesside charity helping children like Jess, 15, through the daily challenges of being young carers