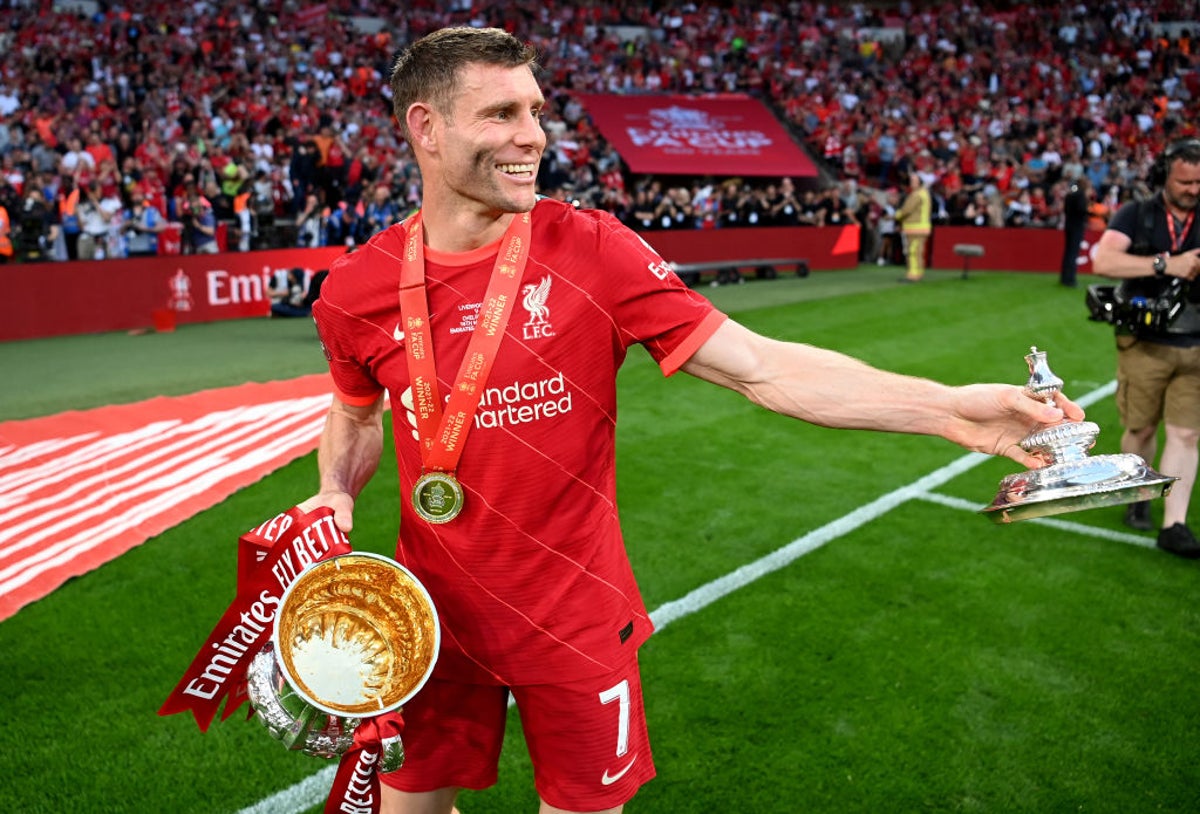 There has always been something reassuringly predictable about James Milner. Even the announcement about his future felt less a case of news than a confirmation of what most expected. It would have been more dramatic if Mohamed Salah or Sadio Mane had declared they had agreed a new contract at Liverpool. Instead, to no great surprise, Milner put pen to paper on a one-season deal. It granted Jurgen Klopp his wish, the Yorkshireman taking the same attitude, fitness levels and haircut into a 21st consecutive Premier League season.

Milner completed a clean sweep of trophies at Anfield with the Carabao and FA Cups. He may yet extend his own unofficial record as the oldest man to win the bleep test. Milner turns 37 in January and, if his longevity and adaptability feel ever more remarkable, his unchanging Milnerness makes it seem entirely natural that a footballer who has played against David Seaman is still wanted for a team who are famous for their high-intensity running.

If there is a temptation to see him as part middle-distance athlete, part role model, Klopp made the point Milner remains a high-grade footballer. “A lot is often made of James’ leadership skills and his influence in the dressing room, and of course that’s correct and justified, but nobody should overlook his quality on the pitch, where he continues to perform to a level that meant we simply couldn’t afford to lose him,” he said.

He has argued Milner can play until he is 40; he has long been clear he wanted to keep him for at least an eighth season at Anfield. Milner may have taken a little persuading, especially with the suspicion Liverpool will sign another midfielder. “The discussions we had around extending his contract were centred on: what kind of contribution do we see him making as a player?” Klopp said. The answer, it seems, is still a considerable one. It is not merely versatility that means his manager deemed him irreplaceable.

But Milner’s role has evolved, perhaps to an extent that it may have encouraged others to believe they could tempt him with offers of more starts and certainly to a degree where he took a pay cut. He has become Plan B; indeed, different types of Plan B. His number of appearances has remained almost identical – 37, 36 and 39 in the last three seasons – but his league starts have been reduced to nine, 11 and nine, each outnumbered by outings as a replacement. Klopp sold Milner’s station on the bench in the 2019 Champions League final as the need for a finisher to close a win out, such duties have become more regular. A hugely influential cameo in the FA Cup final was a sign he can come on and affect even the biggest games. The shift to five substitutes next season, which Klopp advocated, could mean Milner is summoned more often.

But he has been part of other alternative strategies. Klopp tended to perm three from four of Jordan Henderson, Thiago Alcantara, Naby Keita and Fabinho to start the major matches in midfield. Milner’s last two starts came in weakened teams at Newcastle and Southampton. Liverpool won two close games and he was arguably man of the match each time. At St Mary’s, he was charged with lending authority to a makeshift line-up. Liverpool’s midfield options next season will include one player born after Milner’s senior debut, in Harvey Elliott, and one a couple of months before it, in new signing Fabio Carvalho, but the manager still trusts the veteran. The defining characteristics of his midfields have been an unflashy effectiveness, which Milner personifies.

He has a third part in back-up plans. Milner can seem part odd-job man, part special-ops agent. His willingness to accept the least inviting of tasks means he is likelier to be granted them; why expose another to a potentially fraught assignment when an uncomplaining Milner will get on with it as best as he can? Trent Alexander-Arnold only missed two league games before February. It meant Milner, as an auxiliary right-back, was pitched into battles with Wilfried Zaha and Phil Foden. He acquitted himself superbly against the Crystal Palace winger; he somehow made it to half-time against Manchester City without being sent off, in what seemed a case of cruelty to the elderly, and yet gave an improved display after the break. Klopp’s faith was eventually vindicated.

If they present a double act of opposites, the exuberant, grinning German and the down-to-earth Yorkshireman, theirs is an enduring relationship. Only Roberto Firmino and Neven Subotic have played more games for Klopp than Milner and he only needs one more to draw level with the former Mainz and Borussia Dortmund defender.

Klopp has taken to marvelling at Milner’s milestones, often mentioning his 800 career appearances. It is now 814, a number that swells to 921 if his England full and Under-21 caps are included. His new one-year contract should take him past Frank Lampard and into third place in the all-time Premier League list. Appear on the final day of the campaign and he will replace Gary McAllister as Liverpool’s oldest player in the competition. But if Milner can seem a statistician’s delight, both an anachronism but timeless, the meritocrat in Klopp felt a new deal was deserved. Whether as substitute, in rotated teams or out of position because of injuries, Milner is his plug-and-play stand-in.