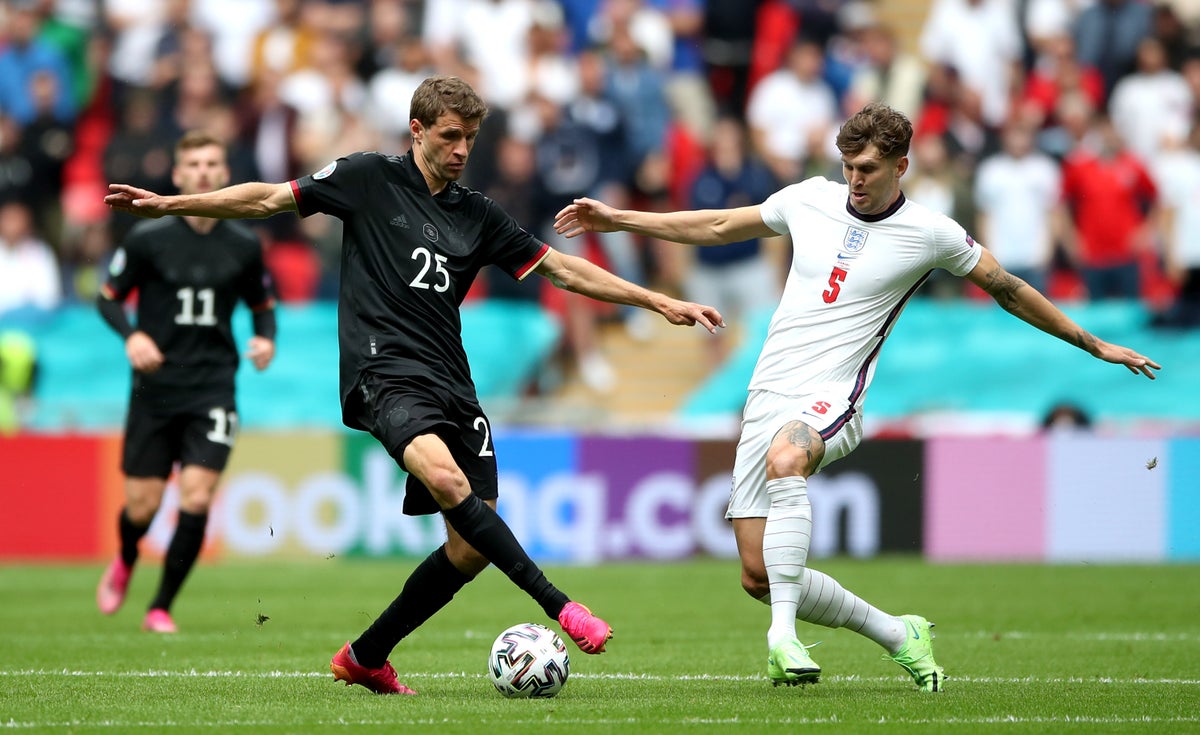 John Stones feels victory over Germany at Euro 2020 gave England the belief they can mix it with the big boys of international football.

Goals from Raheem Sterling and Harry Kane sealed a memorable 2-0 win over their old foes in their round of 16 meeting at Wembley.

After a stuttering group stage, Gareth Southgate’s side were unfancied but turned in one of their best performances to beat Germany in a knockout game for the first time since the 1966 World Cup final.

The two sides meet again in Munich on Tuesday evening as England look to recover from losing their opening Nations League Group A3 fixture in Hungary.

Stones will start at the Allianz Arena having come off the bench in Budapest and he pinpointed the eye-catching win last summer as a landmark moment for the Three Lions.

“For us to play against top-tier opposition, top-tier players, and play the way we did and it gave us that belief that we can compete with these teams, and with these players on a regular basis,” he said.

“I think it was probably the turning point in that tournament of feeling the belief that we could go on and try and win this.”

Stones will pick up his 57th senior cap in Munich, the Manchester City defender having established himself as one of Southgate’s first-choice defenders.

But he admits he had doubts he would reach a half-century when a spell out of the City side saw him temporarily lose his England spot.

Stones picked up his 39th cap in the 7-0 European Championship qualifying win over Montenegro in November 2019 but did not return to the side until a World Cup qualifier against San Marino, 16 months and 10 games later.

“I had a dream as a kid, playing for England, trying to get 50 caps for England and I have made that come true,” he added.

“I didn’t think I would. I was 40-something at the time, I was not playing and I never thought I would get that opportunity again.

“I can’t remember how long I was out of the team but I was not playing at City and you have to be playing and playing well to be called up.

“I did not know if I would get called back up and I used that as a kind of motivation to get back in and it was a big… not switching mentality… but realising what I can do and what I should be doing to be here.

“I think the 50-cap thing was when I made my debut for England. I never thought that would happen but you set yourself a target and it rolls on. That big setback, I thought ‘is it going to happen again?’ and you do doubt yourself.

“Everyone doubts themselves in certain situations when things are not going well. I had to get out of that mentality and try and get back so when I made it, it made it even more special.”

Manchester United captain Maguire was jeered by Three Lions fans at the March friendly with Ivory Coast and has struggled for club form in recent months.

Maguire has spoken of his “shock” at the backlash but insisted it would not affect his relationship with England supporters.

Stones and Maguire played together in the heart of Southgate’s defence as England reached the 2018 World Cup semi-finals and the Euro 2020 final last summer and are likely to both start Tuesday’s Nations League clash with Germany in Munich.

Despite Stones plying his trade across the divide for Premier League champions Manchester City, the pair are close.

“I think some of the criticism that I’ve seen personally and over this season has been harsh,” Stones told BBC Radio 5 Live.

“I don’t want to get into that but I think how he’s conducted himself on and off the pitch, he should be extremely proud of that and, all I can say is, I enjoy playing with Harry and I hope that we can do for many more years to come.”

'No joke': Initial rounds of National Spelling Bee get tough