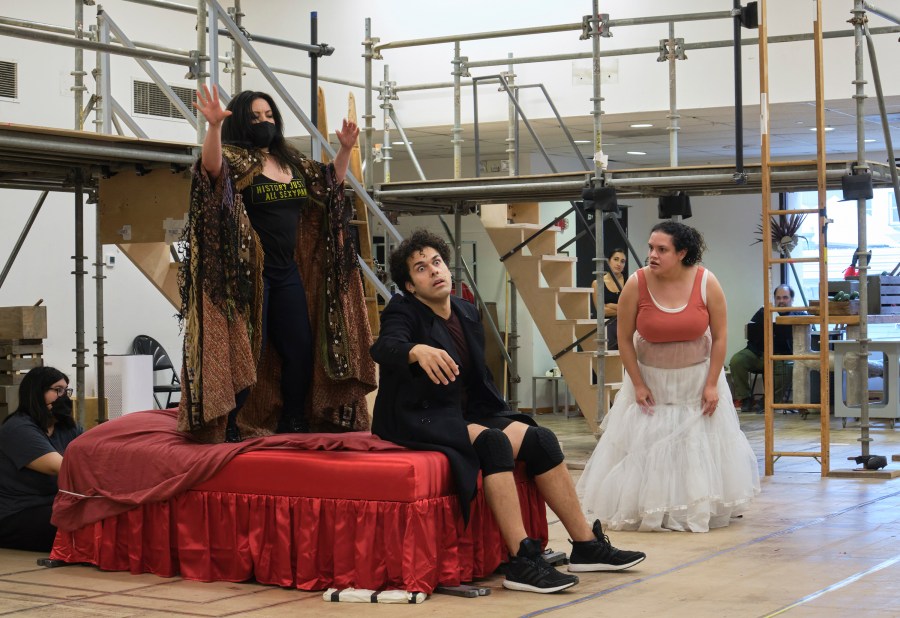 HARTFORD, Conn. (AP) — During an afternoon rehearsal of John Leguizamo’s “Kiss My Aztec!,” actor Joel Perez bursts into laughter during a raunchy scene with co-star Krystina Alabado. They have probably done it hundreds of times. They know it by heart. But the scene is still so funny that Perez loses it for a minute, making the whole cast and crew laugh.

“Keep going,” directs Tony Taccone from his seat. And after a couple deep breaths, things move on.

With a book by Leguizamo and Taccone, “Kiss My Aztec!” begins previews on Wednesday at Hartford Stage before opening on June 10. This is its third stop after previous engagements at Berkeley Repertory Theatre and La Jolla Playhouse in California, and Broadway-veteran Leguizamo hopes it soon takes “the B way” and makes it home to New York.

“I think it’s so funny,” Leguizamo tells The Associated Press right before rehearsal. “You’re gonna laugh your ass off and, at the same time, you’re going to be educated.”

The show travels back to the 16th century, as a group of Aztecs lead the resistance against Spanish invaders. With a fierce female warrior at the helm and a not-so-fierce clown in tow, they mount a scrappy attack, and get entangled with royalty, colonizers, pop stars, even puppets.

The music by Benjamin Velez — with lyrics by Velez, David Kamp and Leguizamo — fuse salsa, gospel, hip-hop, funk and merengue, as well as some flamenco and paso doble for the Spaniards. The choreography is by Mayte Natalio.

Like “Latin History for Morons,” Leguizamo’s last one-man play on Broadway, “Kiss My Aztec!” is a hilarious celebration of Hispanic and Latin culture. But unlike the others, it is his first full-scale musical and the comedian stays behind the scenes this time around.

“I can’t sing like that, or dance like that,” the Tony Award-winner explains, noting that he’s managed to do some musical work — including Disney’s animated film “Encanto,” where he voiced Bruno — with a lot of help, patience and auto-tune. “I mean, like, for ‘Encanto’, poor (song-writer) Lin-Manuel (Miranda) had to spend hours trying to get me in that pocket. He got me, though, he got me in the pocket,” he adds with a laugh.

“These actors are ridiculously talented,” says Leguizamo, calling them a “quadruple threat” who can act, sing, dance and are funny.

The Colombian American actor and playwright, whose Broadway credits include “Freak” and “Ghetto Klown,” says he started working on the musical years ago, when he was doing research for “Latin History for Morons.”

“It’s interesting because obviously, ‘Latin History for Morons’ opened up the world of our great, incredible contributions to the world — there wouldn’t be an Industrial Revolution without our corn, without our potatoes,” says Leguizamo. “Our gold that was stolen from us created the Enlightenment era, and the Renaissance was helped by the wealth that was stolen from us. So I learned so much, and I wanted to go back and start telling our history. This musical is the birth of Latin man, which is the conquest.”

Going from doing monologues to a full-blown musical was a “big challenge,” Leguizamo admits. “All I had to do before is check with myself: ‘What’s your schedule?’ ‘Oh, I am available.’ ‘Oh, great. Let’s start tomorrow!’” he laughs. “This is different, this is a lot of moving parts.”

With its bawdy humor, adult themes and some salty language, the show may not be suited for all audiences. But Leguizamo hopes it to be the next big thing in musical comedies.