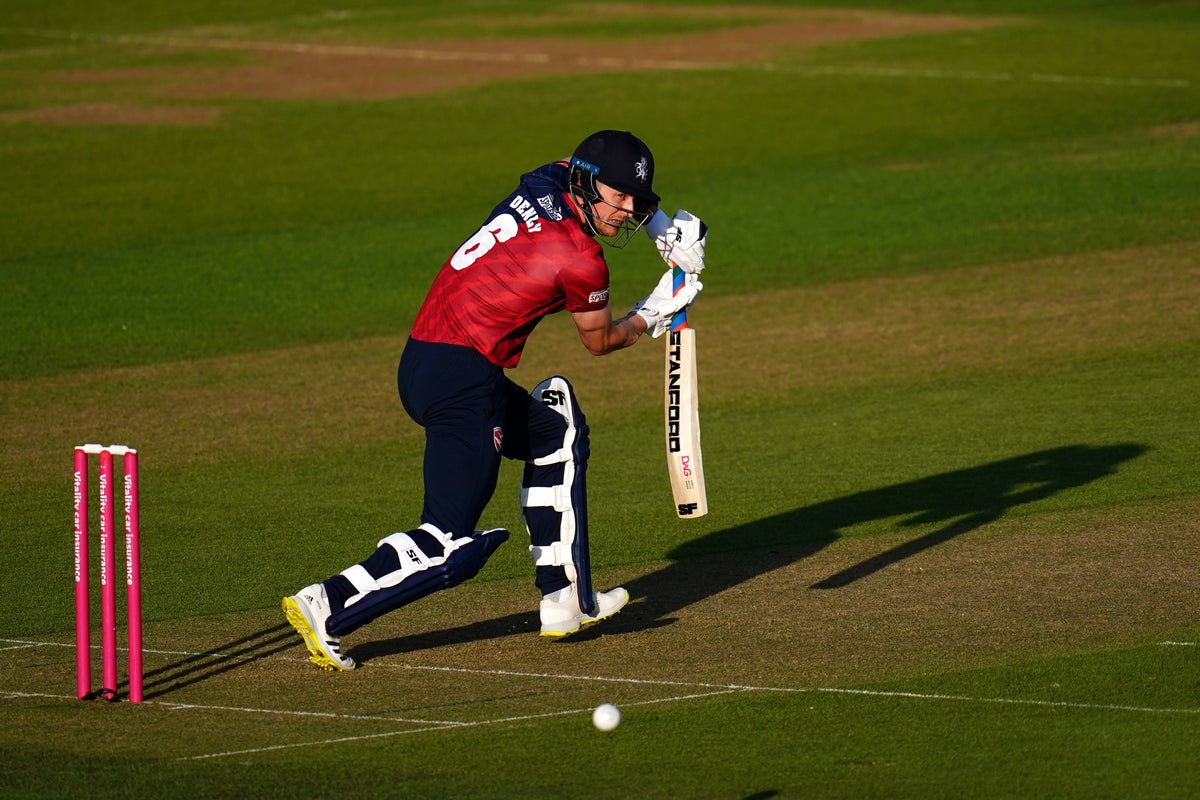 Joe Denly’s explosive century helped defending Vitality Blast champions Kent to their first win of the season as they beat Middlesex by 55 runs.

Denly scored his fifth Blast century – hitting 110 from 58 balls – including six sixes and nine fours as Kent posted 192 for eight. Jordan Cox (45) and Denly put on a record second-wicket stand of 175.

Middlesex pair Chris Green took three for 29 and Martin Andersson three for 32 to rein Kent in during the death overs, but they were always behind the run rate and closed on 138 for seven.

Birmingham returned to winning ways with a thrilling one-run win against Nottinghamshire at Edgbaston.

Needing three to win and two to tie from the last ball, Outlaws batter Tom Moores could only scuff Craig Miles for a single.

It rounded off a stunning fightback by the Bears after Nottinghamshire, chasing 98 for five in an eight-overs-per-side contest, charged to 55 for one after 20 balls as Alex Hales thrashed 30 from just nine balls.

Spin bowler Jake Lintott turned the tide with a superb over, which saw him dismiss Hales and Ben Duckett, while conceding just two runs and with the Outlaws needing 15 from the last over, they could find only 13.

Steelbacks spinners Graeme White (three for 14) and Josh Cobb combined for five for 38 from their eight overs, limiting Durham to 154 for eight.

Graham Clark top-scored for the hosts, but their total appeared to be under-par and was proven to be the case as Lynn took command.

The Australian hit 61 from 47 balls and although there was late drama amid a fine spell of bowling from Andrew Tye (three for 28), the Steelbacks clinched their third win of the campaign with three balls to spare.

Leicestershire secured their third win in four games with the help of a superb spell of bowling from Naveen-ul-Haq in a 26-run triumph against Worcestershire at New Road.

The Afghanistan pace bowler returned career best T20 figures of five for 10 from four overs as the Foxes comfortably defended a total of 162 for six.

He claimed the prized wickets of Brett D’Oliveira and overseas duo Colin Munro and Dwayne Bravo before cleaning up the innings as the Rapids were dismissed for 136 in 19 overs.

Glamorgan’s match against Surrey ended without a result after persistent rain meant that only 21.3 overs were possible.

Surrey batted first and posted 160 for nine from their 20 overs thanks to 48 from Jamie Overton and 31 from Sam Curran.

Glamorgan had made it to nine for no wickets before the rain arrived and, despite the best efforts of the ground staff, they could not get back out there to finish the game.

Oppenheimer leads a complex lifestyle, but does his tax money benefit SA?