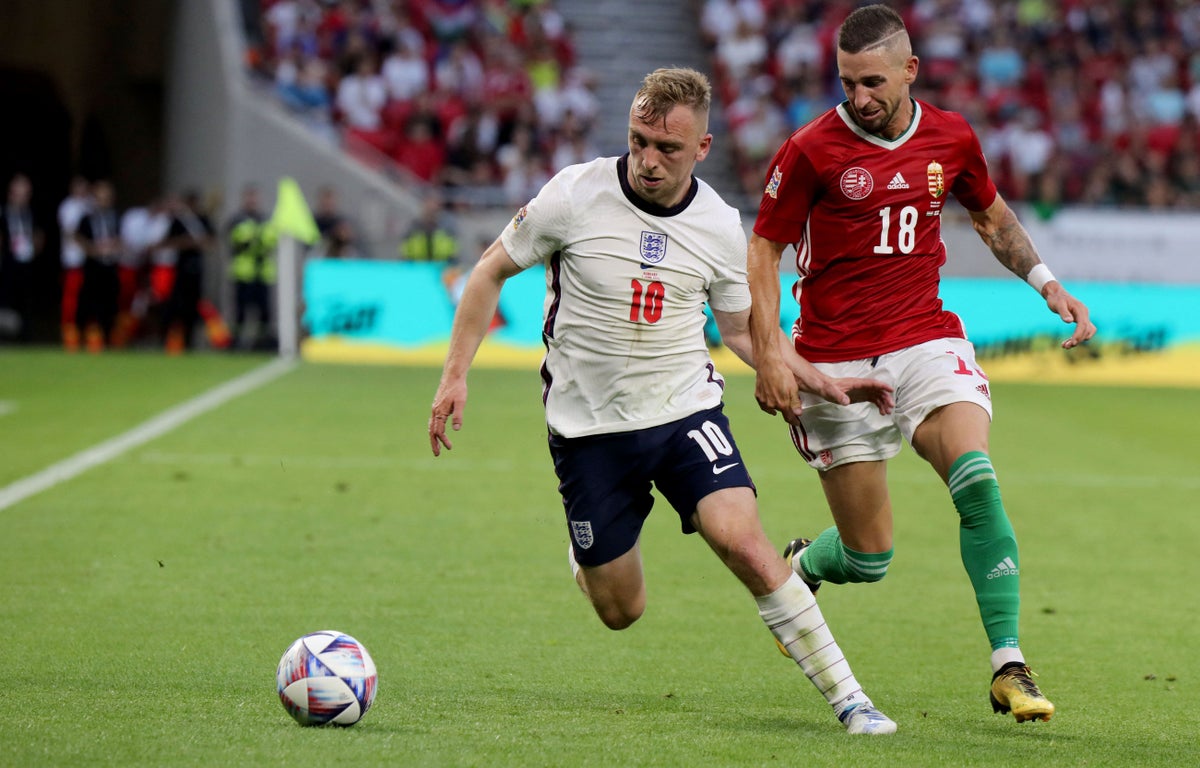 It is two-thirds of the only World Cup-winning formula England ever found. Some 56 years after, West Ham famously conquered the footballing planet, Gareth Southgate emulated Alf Ramsey by looking to London’s East End.

A first loss to Hungary in six decades during which the Mighty Magyars have rarely looked mighty suggests that West Ham alone is not a recipe for success. Ramsey, beaten 6-3 by a rather more celebrated Hungary side in his playing days, never played for England again after that historic humbling in 1953, though he acquired a greater fame in 1966. He chose a trio of Hammers at Wembley then, Southgate plumped for a pair in Budapest and if mentions of Geoff Hurst, Martin Peters and Bobby Moore burden Jarrod Bowen with expectation, the mere fact he was representing his country signified the sort of commitment to improvement that the England manager appreciates.

When Declan Rice, the other beneficiary of David Moyes’ management who Southgate selected, was 19, he was debuting in international football, albeit for the Republic of Ireland. When Bowen was the same age, his only first-team football had come in non-league for Hereford. When he made his England bow, it was in the role often reserved for Phil Foden and Bukayo Saka, capped at 20 and 19 respectively, of the inverted winger, the left-footer cutting in from the right.

The road to Qatar for the 25-year-old may have led through Hereford and Hull. Or not, given the presence of precocious talents, though Covid ruled Foden out and may have facilitated Bowen’s bow in Budapest, and the inauspicious nature of the result.

Yet while both England’s undistinguished performance and an unimpressive Nations League defeat were not conducive to producing the kind of breakthrough display that cements a place in the plans, Bowen approached his task with characteristic zest.

His defining attributes involve relentlessness and irrepressibility. Perhaps that explains why Bowen was on Liverpool’s radar before many another felt he belonged at such a level. Jurgen Klopp’s forwards can have that blend of elusiveness and nuisance value. Bowen, who seems to scurry more than run, was the brightest of England’s front three, even if that is not the compliment it sometimes can be. Mason Mount was anonymous. Until the latter stages, Harry Kane concentrated more on turning up in midfield than getting in the box. It left the newcomer playing a lone hand.

And Bowen was unfazed by his more exalted status. He displayed the incessant energy to run in behind; indeed a volley on target showcased both running power and technique, though not the precision required to beat Peter Gulacsi. He could pop up unchecked across the forward line, emerging in the inside-left channel and have a shot that was blocked, materialising in the middle for an overhead kick that was scuffed at Gulacsi, staying on the right to dart past his marker and deliver an inviting low ball across the six-yard box that just required the finishing touch.

A snap-shot that cleared the bar was a reason why Bowen had more attempts at goal than Mount and Kane did between them, though a clinical touch would have helped and his willingness to look for the ball might have backfired. When he dropped deep, he was dispossessed on the halfway line before Roland Szalai’s audacious attempt to lob Jordan Pickford from 50 yards. It was Reece James instead who made the fatal error, conceding the penalty for Dominik Szoboszlai’s decider.

It may have been a more damaging day for another full-back, however. Even before it was curtailed by injury at the break, James Justin had a difficult debut; many of Hungary’s first-half attacks stemmed from their right flank and the dynamism of Loic Nego. The Leicester player may be better suited to the role of full-back than wing-back. England’s 3-4-3 formation necessitates that someone relieves the attacking burden on the front three and, for too long, no one did.

And Saka added an attacking thrust when he replaced Justin, surging through on a solo run before having a shot saved. Right winger for Arsenal this season, left wing-back for England, he has an enviably broad skill set. Saka feels a shoo-in for the World Cup, but his versatility could come at a cost to others in the juggling act to pick the final squad. Certainly Justin’s chances feel slighter.

In a tale of two debutants, Bowen may have enhanced his reputation without quite reshaping the pecking order. He probably still ranks behind Foden and Saka. If the journey from the Conference Premier League to the Nations League is sufficiently unlikely that any international appearance is one to be savoured, he could be forgiven for wishing it came when England actually played well.