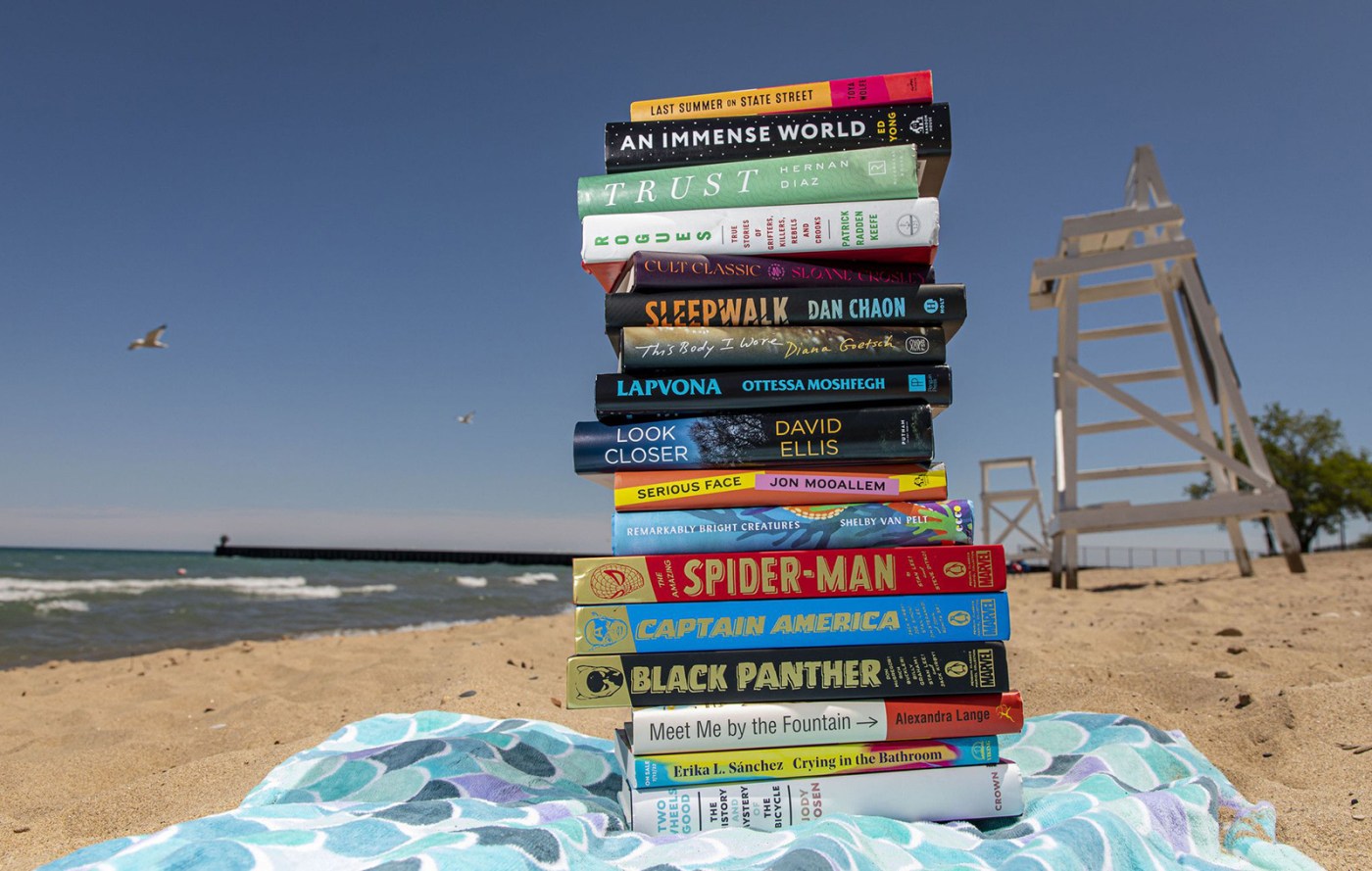 Look, this summer, read whatever you want.

Indulge your whims. It’s been a few summers since you could comfortably relax on a beach, towel to towel with strangers, and just lose yourself in a long book for a couple of hours.

Once a season defined by escapist, light reads, summer is still that, plus a world of variety that acknowledges: Not everyone has a beach or time for a long book. What follows are titles (new or coming soon), ideal for the warmest months of the year, with an eye on the many moods and scenarios of summer, now to Labor Day:

There was a time I would be excited by a new David Sedaris book, but somewhere in the past 20 years, while his autobiographical snapshots stayed as mordant and funny as ever, a familiarity set in. “Happy-Go-Lucky” ($29, Little Brown) is like a reminder of an old friend who can still make you laugh out loud, but with a poignance now. Subjects include the ugliness of his father, art school in Chicago (“if you could draw Snoopy on a napkin, you were in”) and entitled fans.

“I could feel the trouble but I couldn’t put words to it,” Isaac Fitzgerald writes plainly in his rowdy, more traditional memoir, “Dirtbag, Massachusetts” ($27, Bloomsbury), about a childhood of homelessness, told without piety or violin strains of uplift, but rather, an embrace of the chaos of just getting by.

David Ellis, a justice in the Illinois First District Appellate Court, has built an impressive side gig from the Chicago suburbs as a master of the classic airport thriller — meaning the sort you absorb during a plane ride someplace warmer. If the name is familiar, he’s also a James Patterson co-writer, and that speedy tone rubs off. “Look Closer” (Putnam, $27), his latest, is full of business bros and loathsome creeps, and the tale of murder and misdirection is a solid two days of beach escape.

Toya Wolfe reaches into her debut novel, “Last Summer on State Street” (William Morrow, $28) and pulls out a thoughtful snapshot of the end of public housing high-rises in Chicago. Wolfe maps the geography of a childhood with the kind of vividness that brushes aside nostalgia.

“Everything I Need I Get From You: How Fangirls Created the Internet As We Know It” (MCD, $18) is partly about One Direction, and “This Is Not a Book About Benedict Cumberbatch” (Putnam, $17), is, yes, mostly about Benedict Cumberbatch. But the real subject of both these wonderfully fresh takes on fandom is the unabashed, self-aware embrace of joy. Kaitlyn Tiffany, a writer at The Atlantic, uses her love of One Direction ingeniously to trace how online culture came to feel. And Tabitha Carvan, now long out of adolescence, wrestles bravely with an embarrassing addiction to the former Sherlock, but also, considers the way we treat women who feel deeply.

Alexandra Lange’s “Meet Me By the Fountain: An Inside History of the Mall” (Bloomsbury, $28)  reacquaints us with the roots of half-accomplished dreams; in this case, one of our best design writers traces the influence of Waukegan’s Genesse Street, “Dawn of the Dead” and department stores on now-struggling suburban sprawls saddled with acres of parking.

When last we saw her in Alexander Payne’s classic comedy “Election,” Tracy Flick (played by Reese Witherspoon) was in Washington, her high school ambitions running unchecked in the real world. That was the film. Tom Perrotta’s 1998 novel was more vague. “Tracy Flick Can’t Win” (Scribner, $27) catches up with her decades later as a high school vice principal, for a new microcosm of a book about frustration and small-town power.

“Other Terrors: An Inclusive Anthology” (William Morrow, $17) by Vince Liaguno and Rena Mason is an ingenious collection of frights by marginalized identities. Vampires aid the trans community. Latinx heroes see “something in the woods.” It’s a lot of fun.

As is Modern Library’s welcome, ongoing new reissues of the great underappreciated British science fiction writer John Wyndham, best known for being the inspiration of drive-in classics like “Village of the Damned” and “The Day of the Triffids.” He’s also aged well. “Trouble with Lichen” is about a feminist revolution, and “The Kraken Wakes” addresses rising seas. And those are 60-plus-year-old books.

Sloane Crosley’s “Cult Classic” (MCD, $27) adopts a soft sci-fi vibe, and slaps it against a rom-com: A young New Yorker runs into an old boyfriend, then another. Then another. That plot (she’s the unwitting focus of an experiment) is less interesting than Crosley’s spot-on understanding of dating, and the roads not traveled.

Rarely does a book arrive so on time, blowing out the noise. Diana Goetsch’s “This Body I Wore” (FSG, $28) is not a memoir of a New York City schoolteacher who transitions but rather, a straightforward, well-remembered, hilarious personal history of the full life as a trans woman. It’s never pedantic or even inspirational, which is exactly why it is.

Nothing about the new Penguin Classics Marvel Collection ($50 each) suggests a beach read. They’re weighty, elegant, stuffed with dozen vintage issues of Captain America, Black Panther and Spider-Man; archival letters; and appreciations (including from Flossmoor’s Nnedi Okorafor on Black Panther). Each, though, is an ideal rainy day of escape, and posterity.

Dan Chaon’s “Sleepwalk” (Holt, $28) and Ottessa Moshfegh’s “Lapvona” (Penguin, $27),  share only a resistance to easy summary. “Lapvona” tells the story of a shepherd’s son who comes fatally close to the rulers of a medieval fiefdom. Moshfegh, following up on her acclaimed “My Year of Rest and Relaxation,” continues to plumb entitlement and class; here, she adds magic and revenge. “Sleepwalk” offers a world of similar cruelties, set in a near future. Chaon has been an underrated gem for so long it’s nice to say his latest reads like a breakout: A Big Lebowski-esque drifter navigating a crumbling country learns his time in Evanston left a strange, unsettling legacy. To say more would spoil it.

“Rogues: True Stories of Grifters, Killers, Rebels and Crooks” (Doubleday, $30) is by Patrick Radden Keefe, who set new standards for contemporary true crime with the bestsellers “Say Nothing” and “Empire of Pain.” This is a victory lap, a collection of New Yorker pieces, yet also timeless, intricately built portraits of willful neglect, madness and hubris — featuring mass shooters, drug lords and “The Apprentice” creator Mark Burnett.

“The Lost Summers of Newport” (William Morrow, $29) — by a trio of historical fiction icons, Beatriz Williams, Lauren Willig and Karen White — is an elegant approach to the old “trouble in paradise” scenario, spanning generations of deceit in a New England mansion.

Elin Hilderbrand’s latest is “The Hotel Nantucket” (Little Brown, $29), and like Stephen King, she brings knowing confidence to an abused genre. This one is about secrets. And pretty nuts. But then, aren’t they all?

Easter 2022: LOOKFANTASTIC relaunches popular Beauty Egg worth over £200 for less than £70