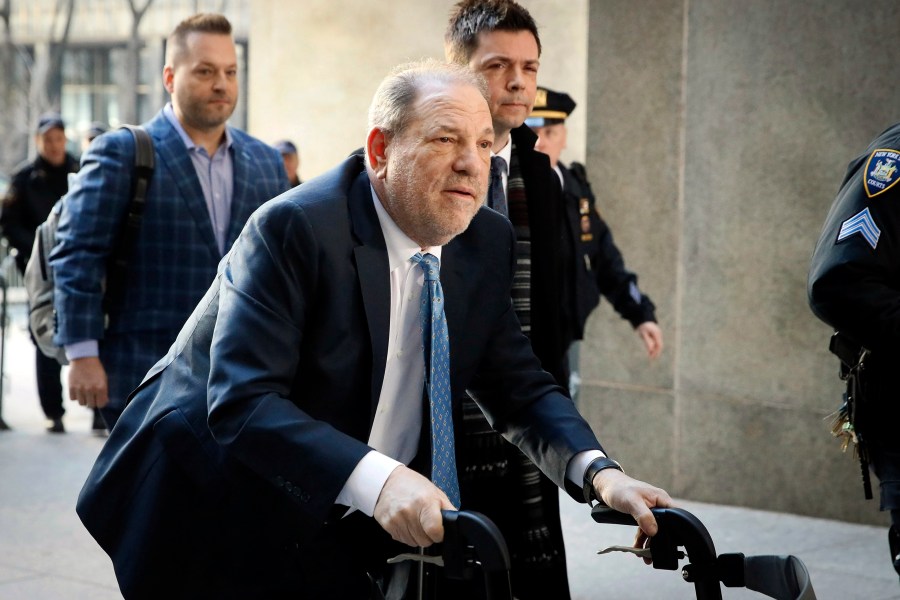 
Get the latest news, weather, sports and entertainment delivered right to your inbox!

The ruling by a five-judge panel in the state’s intermediate appeals court affirmed one of the highest-profile verdicts to date in America’s reckoning with sexual misconduct by powerful figures—an era that began with a flood of allegations against Weinstein. He is jailed in California, where he was extradited last year, and is awaiting trial on charges he assaulted five women in Los Angeles and Beverly Hills from 2004 to 2013.

Weinstein’s publicist, Juda Engelmayer, said he is reviewing his options and will seek to appeal the decision to the state’s highest court, the Court of Appeals. “We are disappointed, but not surprised,” she said.

Manhattan District Attorney Alvin Bragg took office in January, while Weinstein’s appeal was pending. In a statement, he said that prosecutors were “gratified by today’s decision, which upholds a monumental conviction that changed the way prosecutors and courts approach complex prosecutions of sexual predators.”

Weinstein, 70, was convicted in New York in February 2020 of forcibly performing oral sex on a TV and film production assistant, Mimi Haley, in 2006 and raping an aspiring actress in 2013. He was acquitted of first-degree rape and two counts of predatory sexual assault stemming from actor Annabella Sciorra’s allegations of a mid-1990s rape.

Kevin Spacey charged in UK with 4 counts of sexual assault

The Associated Press does not generally identify people alleging sexual assault unless they consent to be named; Sciorra has spoken publicly about her allegations, and Haley has agreed to be named. Lawyer Gloria Allred, who represents Haley, Sciorra, and another witness, said that she was “thrilled” that Weinstein’s conviction was upheld and that her clients’ “many sacrifices for the cause of justice” were not in vain.

“Justice was done,” Allred said. “Now I am also looking forward to the criminal prosecution of Mr. Weinstein in Los Angeles, where I also represent alleged victims for whom charges have been filed.”

What’s next for Will Smith after Academy resignation

Former District Attorney Cyrus Vance Jr., who oversaw Weinstein’s prosecution, told The Associated Press that he always had confidence in the strength of the case. He said he was confident that trial judge James Burke’s rulings were fair and would be sustained on appeal. “I am also grateful this decision by the appellate court fully credits the powerful testimony of the brave and strong survivors of Mr. Weinstein’s abuse,” Vance said. “They are one step closer to full closure of the legal process, which they deserve.”

In Weinstein’s case, the appeals court took an unusually long time to rule—nearly six months after contentious oral arguments last December that stoked doubts about whether his conviction would stand. The court had been expected to rule in January.

At the hearing, some judges were critical of Burke and prosecutors, suggesting they were open to reversing Weinstein’s conviction and ordering a new trial. Judge Sallie Manzanet-Daniels said Burke let prosecutors pile on with “incredibly prejudicial testimony” from additional witnesses. But in the 45-page ruling Thursday, the five judges were unanimous in finding that Burke had properly exercised his discretion in allowing testimony from three women who accused Weinstein of violating them, but whose claims did not lead to charges in the New York case.

The judges also concurred with Burke’s decision to let prosecutors confront Weinstein with evidence about other, unrelated misbehavior if he’d testified, including whether he’d stranded a colleague in a foreign country, told people to lie to his wife, or screamed at restaurant staff while demanding a late-night meal.

The volume of material pertained to 28 alleged acts of boorish behavior over 30 years, and was “unquestionably large, and, at first blush, perhaps appears to be troublingly so,” according to the judges. Still, in their ruling, the judges said that Burke properly weighed its relevance to the case. Weinstein didn’t take the witness stand.

Cuomo accuser on #MeToo, 4 years in

The panel also rejected Weinstein’s arguments that Burke was wrong in other ways. He kept a juror who wrote a novel involving predatory older men, and let a prosecution expert testify about victim behavior and rape myths. Burke did not allow testimony on similar subjects from defense experts.

Rules on calling additional witnesses to testify about “prior bad acts” vary by state and were an issue in Cosby’s successful appeal of his sexual assault conviction in Pennsylvania. New York’s rules, shaped by a decision in a 1901 poisoning case, are among the more restrictive.

Bill Cosby issues statement after prison release: ‘I have always maintained my innocence’

At the December hearing, Weinstein’s lawyers argued that the extra testimony went beyond what’s normally allowed—detailing motive, opportunity, intent, or a common scheme or plan—and essentially put the ex-studio boss on trial for crimes he wasn’t charged with and hadn’t had an opportunity to defend himself against. “The jury was overwhelmed by such prejudicial, bad evidence,” Weinstein lawyer Barry Kamins told the appellate panel. “This was a trial of Harvey Weinstein’s character. The people were making him out to be a bad person.”