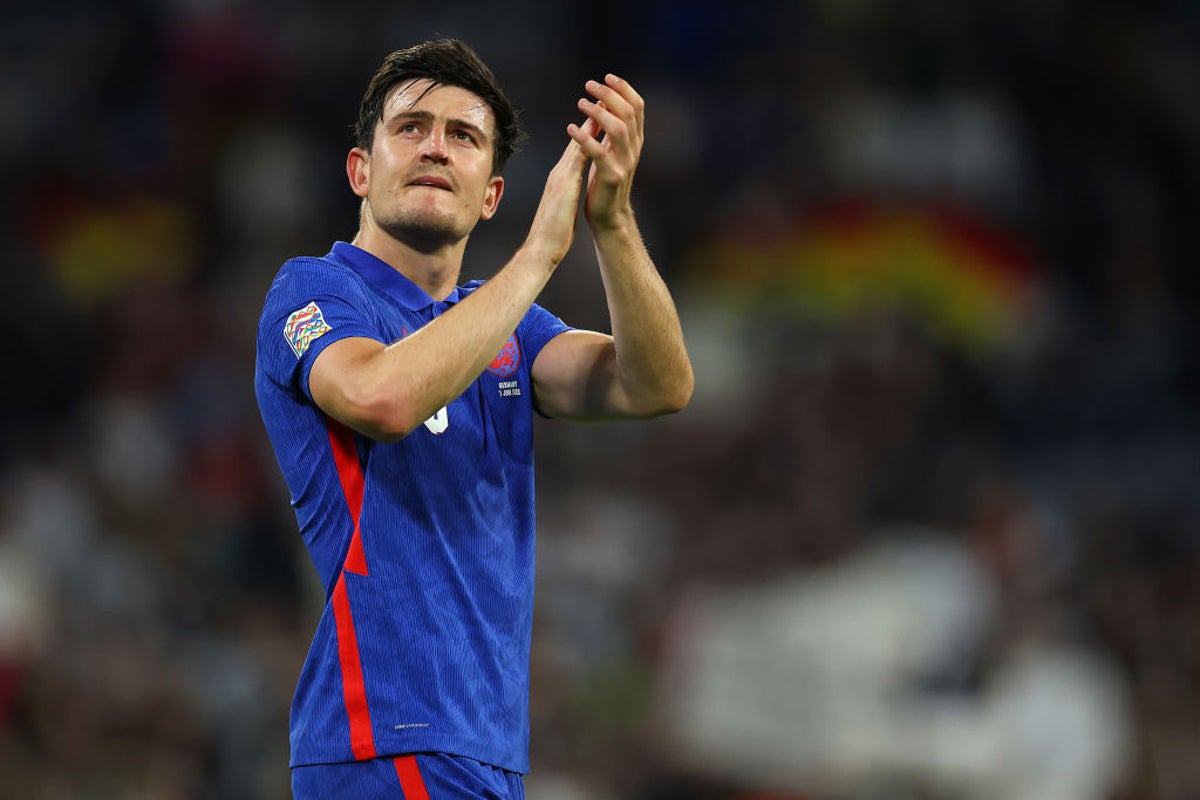 The Slabhead Beckenbauer got close to Kai Havertz. Too close, it soon transpired, as the Germany forward rolled him, the ball flew past him and Jonas Hofmann ran clear to slot a shot past Jordan Pickford.

The way Harry Maguire’s season has gone, he probably expected the goal to stand. Cue another picture of an increasingly haunted Maguire with hangdog expression, again straddling the divide between lucklessness and haplessness? Actually, no. Instead, he was reprieved by the flag; Hofmann was offside.

That time, anyway. When the Borussia Monchengladbach midfielder found the net for the second time, Maguire may have overcorrected. He stepped out to close down Havertz but did not get close enough. Kieran Trippier and John Stones did not fill the hole he left behind him. Hofmann darted into it.

Which is not to say this was the latest addition to Maguire’s compilation of cock-ups. Rather, it was evidence that slight misjudgements can come at a cost, particularly with a disjointed defence. Hofmann’s disallowed goal owed as much to Stones, wandering out of possession.

Even as England fielded the most experienced 11 Gareth Southgate has named, and 10 of the starters who beat Germany last year, they looked a team who has mislaid their chemistry and cohesion.

A Manchester United player captained England to a 5-1 win in Munich in 2001; some 21 years later, the current United skipper – though perhaps not for much longer, judging by Erik ten Tag’s non-committal comments – brought a brand of cumbersome, sometimes unconvincing, defiance that at least gave England a platform for a late equaliser. They were rescued by a Harry; just not him.

His own evening was not always easy viewing.

Arguably Maguire’s finest display in his country’s colours came against Germany. But at Wembley, not the Allianz Arena, in 2021, not 2022 and in Euro 2020, not the Nations League.

But his wretched personal run ended with Harry Kane’s penalty. He was set for a fifth consecutive loss: Liverpool and Brighton, Crystal Palace and Hungary had beaten teams with him in the heart of the defence. He had seemed the wrong sort of mascot, spreading misery wherever he went. He became the emblem of United’s traumatic, troubled season.

Even when he last tasted victory for England, he was booed against Ivory Coast in March. As the majority of his performances on the international stage have been excellent, it felt a case of schadenfreude.

In the country that coined the phrase, if not the emotion, in the home city of the original Beckenbauer – former Bayern Munich and Germany captain Franz – Maguire scarcely brought the stylishness associated with a rather more iconic defender.

He can seem a man doubting himself, questioning things that used to come naturally as though expecting an accusing stare and melodramatic gesture from Cristiano Ronaldo whatever he does.

But he toiled in a bid to rediscover form. There were a few thumping headed clearances, a solid block on a shot from Jamal Musiala, who seems precisely the sort of quick, skilful attacker who was designed to embarrass Maguire.

And the mediocrity ahead of them meant that England’s back four were overworked. Briefly, it seemed that Germany might be the best side a defence featuring Maguire had shut out all season (that, however, is another indictment, especially when it is considered Nuno Espirito Santo was in charge of Tottenham when United kept a clean sheet against Spurs).

The third highest scorer in this England squad exerted an influence in the other box: when challenged by Maguire, Manuel Neuer spilled a corner and Kane blazed wastefully over, while the goalkeeper tipped a looping header from the centre-back away.

It was not a shape-shifting performance, definitive enough to indicate his fortunes have finally changed. But, while Maguire seems to have swapped the role of the ungainly, unlikely national hero he enjoyed in 2018 for the role of the country’s favourite scapegoat, nor was it actually evidence Southgate must drop Maguire.

That would placate his social-media detractors. But his manager is a loyalist who stuck with Maguire when he was scrabbling for form in an awkward autumn of 2020.

Southgate may see something of himself in a defender who has inherited the shirt number he wore against Germany in Euro ‘96: neither was fast-tracked to the top, both were first capped in their mid-twenties when at a Midlands club. Perhaps each has reached greater heights in the international game, though only one commanded an £80m price in the club game.

But his status as Southgate’s preferred stopper seems safe. His understudy Tyrone Mings has been dropped. Impeded by injury, the young pretenders Marc Guehi and Fikayo Tomori are yet to take the field in the June internationals.

Perhaps, amid an undeserved draw, Maguire passed a test of character. As one Harry buried a penalty for his 50th international goal, another could savour one of his best results of a season he would surely otherwise rather forget.