Germany vs England LIVE: Nations League build-up and team news ahead of clash in Munich tonight 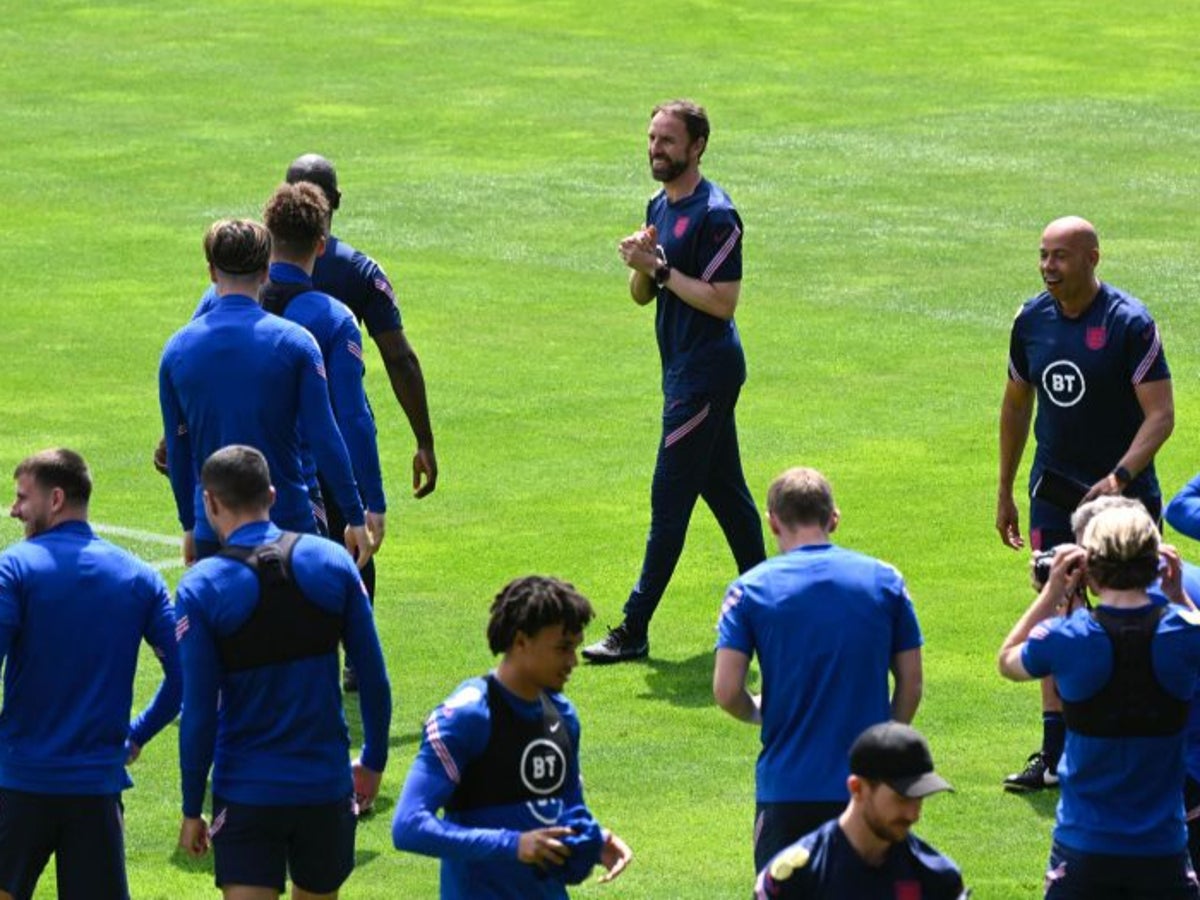 Southgate: ‘Germany are still the benchmark for success in world football’

England face Germany in Munich this evening for their second Nations League game of this international break, with both sides aiming to bounce back to winning ways.

While the Three Lions suffered a chastening 1-0 defeat to Hungary, Italy held Germany to a 1-1 draw despite failing to qualify for the World Cup later this year.

When England and Germany met a year ago in the last-16 at Euro 2020, it was Gareth Southgate’s side who triumphed 2-0, on their run all the way to the final.

This time around there’s rather less at stake but Harry Kane remains four goals short of Wayne Rooney and the all-time England scoring record, while elsewhere players on both sides will be keen to stake a claim for a World Cup place.

Follow all the build-up and then the live action from Munich below:

While many players resent this international break, with Kevin De Bruyne the most vocal, one of the Belgian’s Manchester City teammates just can’t feel the same way.

That is because it wasn’t that long ago that John Stones felt he would never play for England again. The centre-half was on 39 caps in November 2019, but it stayed that way until March 2021. That was largely down to the fact he wasn’t playing much football at all under club manager Pep Guardiola.

“I had a dream as a kid, trying to get 50 caps for England and I have made that come true but I didn’t think I would,” Stones explains. “I was not playing and I never thought I would get that opportunity again.

“I was not playing at City and you have to be playing and playing well to get called up. I did not know if I would get called back up and I used that as a kind of motivation to get back and it was big. It wasn’t switching mentality, but realising what I can do and what I should be doing to be here.”

Stones delighted to be back with England

Manchester City’s John Stones will earn his 57th senior cap for England should he feature on Tuesday night, something which he still admits is still hard to believe.

“I had a dream as a kid, playing for England, trying to get 50 caps for England and I have made that come true,” he said. “I didn’t think I would.

“I think the 50-cap thing was when I made my debut for England. I never thought that would happen but you set yourself a target and it rolls on.”

Stones’ first involvement with England at any level came in an under-19s game against Germany back in 2012 and he’s since progressed through the ranks to become an established member of the senior squad offering a sense of stability in England’s defensive line.

Leicester City defender, James Justin, will miss tonight’s match versus Germany due to the injury his picked up at the weekend during his England debut against Hungary.

AC Milan centre back Fikayo Tomori is also unlikely to feature but Marc Guehi and Raheem Sterling are expected to be available.

Southgate said: “James [Justin] won’t be ready for tomorrow but we are hopeful he can be back for if not the next game then the game after.

“Marc [Guehi], as far as we have assessed to this point, because things are still going on, should be available for tomorrow.

“With Fik [Tomori], we might give him a little bit longer. He has progressed really well and we probably could put him in the squad but given it was a hamstring injury, we are going to give it a little bit longer because that would be beneficial for him.

“As for Raheem [Sterling], he is absolutely fine.”

Germany to take the knee in show of solidarity with England

The depressing reaction greeted the stance in Saturday’s Nations League opener at the Puskas Arena, which was half full despite the hosts serving a Uefa punishment for discriminatory behaviour at Euro 2020.

There were around 35,000 in attendance for a match that was supposedly being played behind closed doors as Hungary made the most out of regulations that allowed children to attend in such circumstances.

Gareth Southgate wants England to emulate countries like Germany and Brazil as they look to win trophies on the international stage and says that the German’s winning mentality is what he is trying to create in his squad.

“Germany and Brazil are still the benchmark in terms of the countries who have consistently won tournaments,” says the England boss.

“Even when everyone will talk about the 5-1 [England’s 2001 victory over Germany in a World Cup qualifier] here, Germany ended up in the World Cup final on the back of that qualifying campaign.

“So, you have to respect what they’ve been as a country and what they are as a country in footballing terms – and that mentality is what we’re trying to create.

“We’ve got to keep getting to the final stages of competitions, and games like tomorrow are brilliant for us. They’re exactly the kind of test we need.”

A new era for Germany

The last time these two sides met was in the Euro 2020 knockout stages with England winning 2-0 in what was Joachim Low’s final match in charge of the German national side.

Low was replaced with former Bayern Munich boss, Hansi Flick, who has so far led the Germans to a 10 games unbeaten run which includes their 1-1 draw with Italy last time out.

“Their game is very physical. Harry Kane is a world-class striker, he has a huge quality,” he said. “It will be a big game for us and it will be important to implement our plan well.”

England had a good inaugural campaign in the Nations League, making it to the semi-finals and eventually finishing third behind Netherlands and Portugal in the 2019 edition.

However, the tournament hasn’t always been fantastic for manager Gareth Southgate.

His Nations League record is five wins, three draws and five defeats. Will he improve on that with a victory over Germany tonight?

Germany vs England: Talking points ahead of Nations League clash

England will look to bounce back from their surprise Nations League defeat to Hungary when they travel to face Germany on Tuesday night.

The Three Lions beat their old foes en route to the Euro 2020 final last summer and will be hoping to repeat the feat to kick start their Nations League campaign.

Here we take a look at the main talking points ahead of the meeting at the Allianz Arena:

England boss Gareth Southgate has called on his attacking players to start scoring more goals as the Three Lions are currently reliant on Harry Kane and Raheem Sterling to put the ball in the back of the net.

The Three Lions are looking to respond after a 1-0 defeat to Hungary last Saturday – a game which saw Kane drop deeper to get on the ball and Sterling remain on the bench throughout.

Of the current England squad only three players have five goals or more at the international level with those being Kane (49), Sterling (19) and Harry Maguire (seven).

“What is clear is that in terms of goals, we are heavily reliant on Raheem [Sterling] and Harry [Kane],” Southgate said. “There are opportunities for others to step into that fold, because the squad we have got with us, I think Harry Maguire is the next in terms of goals scored.

“We do need those attacking players in particular to step forward and start to give us threats from other areas. Bukayo Saka has started to do that and Mason Mount has got the odd goal, but that is the challenge now for this whole group.”

England boss, Gareth Southgate, has been speaking about tonight’s Nations League clash with Germany and what he is expecting from the game.

“This will be a brilliant test of what we’re about and where we are at, at this particular moment in time.” he said.

The wing man spreading a lifetime love of chicken