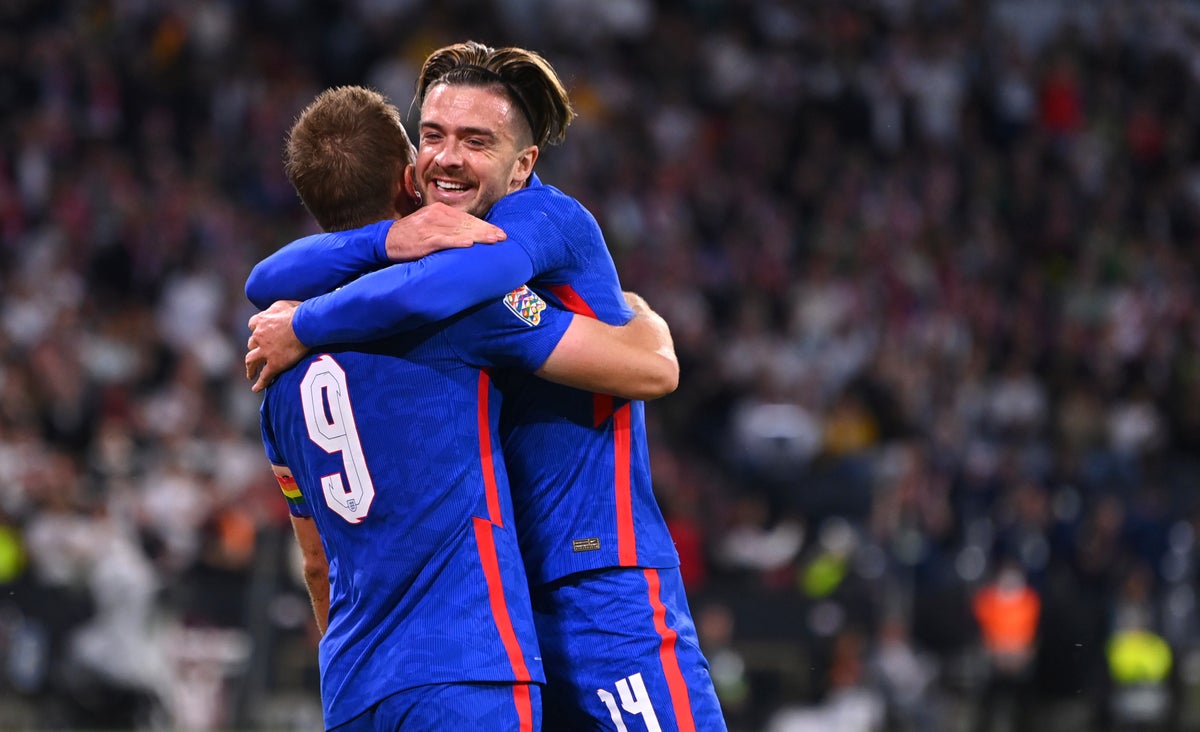 Gareth Southgate has challenged Jack Grealish to force his way into his starting line-up after an impressive cameo in England’s Nations League draw in Germany.

The Three Lions rescued a late point as Harry Kane scored his 50th senior international goal from the penalty spot to cancel out Jonas Hofmann’s opener.

Germany looked good for victory before Kane won and scored the spot-kick which earned a 1-1 draw and prevented England from slipping to back-to-back defeats in Group A3.

Kane, who becomes just the second man to reach a half-century of England goals and moves just three behind Wayne Rooney’s record of 53, will no doubt grab the headlines.

But Grealish helped change the momentum of the contest after he replaced the ineffectual Mason Mount with just 18 minutes remaining.

Half of Grealish’s 22 England caps have come as a substitute and he has only finished 90 minutes three times for his country.

Asked if he sees the Manchester City man as an impact player or a starter, Southgate replied: “I think he can be both.

“If we didn’t trust him we wouldn’t put him on the pitch with 20 minutes to go in the belief he can make a difference.

“The start of the game, the challenge to the wide players to attack, defend, try to score goals at a high tactical level and you’ve got to be spot on.

“I think that’s an area Jack can get better at and what he did do was carry the ball and at that moment of the game as it opens up there’s a little more space, a little more opportunity, and also that freshness.

“The impact that he and Jarrod Bowen had was really important in those attacking areas. There is a good challenge there, good competition for places and we’ve got to keep pushing them.”

Hofmann struck five minutes into the second half having already seen an effort ruled out for offside – Thomas Muller also having a goal chalked off as the hosts often outclassed – and out passed – the beaten Euro 2020 finalists.

But Kane was adjudged to have been tripped by Nico Schlotterbeck, with the video assistant referee coming into play to award England the penalty.

“The finish is exceptional, isn’t it?” Southgate said of the resulting spot-kick. “The pressure at that moment, he trusts his technique. We have huge faith in him. I haven’t really seen the re-run (of the decision) again.

“It looked at the time as though there had been an obstruction on him, at the very least. I’m assuming the referee has looked at it and decided that was the case.

“Rightly, the fact that he’s got 50 goals will be the centre part of the story. But his all-round game, the way he led the line, the way he competed, the way he pressed from the front for us today was exceptional.”

Southgate was pleased with the way England responded to falling behind to a nation he described on the eve of the game as a “benchmark” of international football.

“To respond in the way they did was fantastic, I thought in the balance of the overall game it was well deserved,” he added.

“It’s an important sign for them as much as anything – of course for everybody else watching, but when you’re in a team, this group, with still seven or eight who got us to a World Cup semi-final, that’s why those players are so important to us because that core of the team put their bodies on the line for each other and on nights like that you have to do that to get a result.

“With the quality we had on show, we thought we had to raise the bar. We could see the game was there for us when we got the ball the other side of their midfield, we were in business.

“In the second half, we started a little bit slowly out of possession. We weren’t aggressive enough with our pressure and conceded.”

Germany coach Hansi Flick revealed he spoke to the officials about the award of the late penalty, and said: “I think Schlotterbeck didn’t even see Kane coming.

“He was watching in a completely different direction. I spoke to the referee after the game and had a lively discussion but it is something you just have to grin and bear it – it is a decision, full stop.”

Allison Hanes: Quebec needs to get serious about curbing sprawl