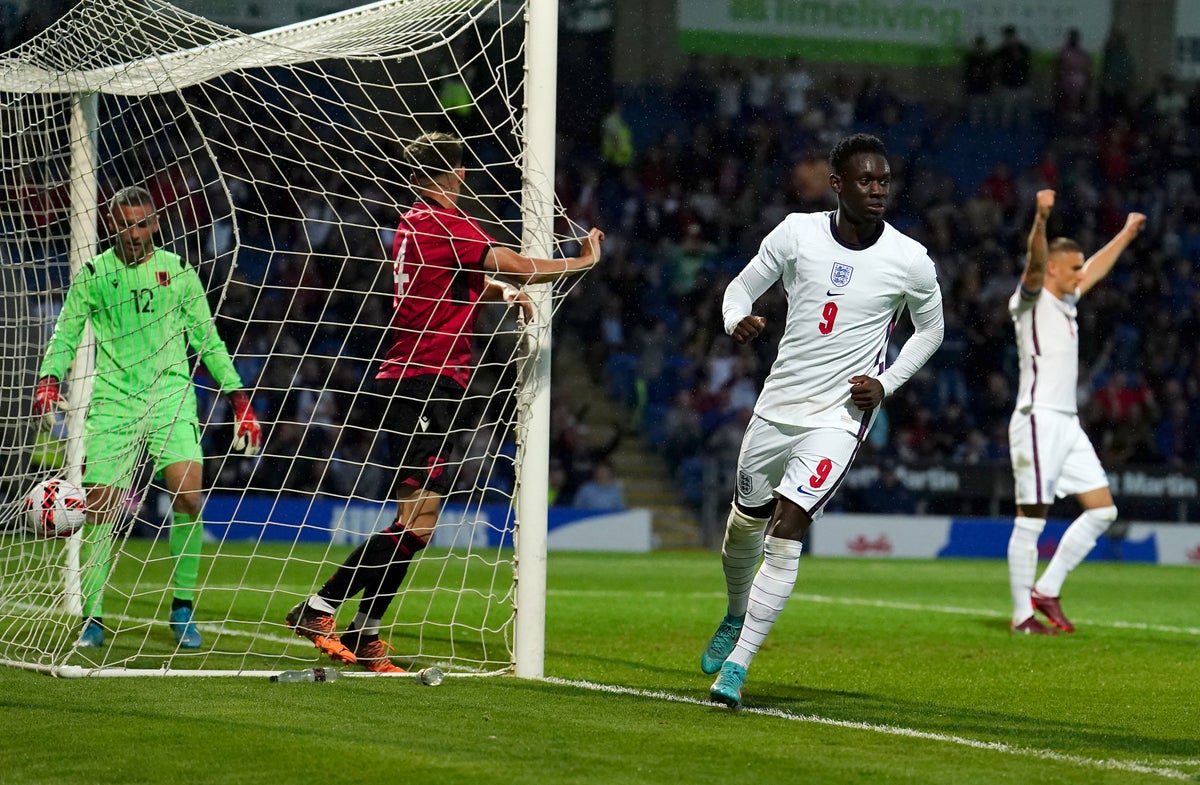 The Arsenal striker struck in each half before Cameron Archer sealed a 3-0 victory to rubber stamp the Young Lions’ place at next year’s tournament in Georgia and Romania.

The visitors also had Armando Dobra sent off in the second half after two cynical fouls on Anthony Gordon.

England are three points clear in Group G but now cannot be overhauled by the Czech Republic – who play Andorra on Monday – as they have a better head-to-head record after beating them twice.

It means Lee Carsley’s side have reached the Euros with two games to spare, Friday’s trip to Kosovo and Monday’s visit of Slovenia in Huddersfield.

England had previously sealed their Euro 2019 qualification in Chesterfield with a 7-0 thumping of Andorra four years ago.

They may have lacked the stellar scoreline at the Technique Stadium this time but were no less dominant, even if they had to wait for the breakthrough.

It looked like it would come early as, inspired by Everton’s Gordon, the Young Lions tried to go for the kill and should have gone ahead after six minutes.

A slick move involving Emile Smith Rowe, Gordon and Balogun sliced Albania apart and Ben Johnson crossed for the arriving Angel Gomes to sidefoot the ball against the post from six yards.

Livewire Gordon had already enjoyed himself during England’s domination, seeing Bruno Puja spill a low shot, while he also fired at the goalkeeper.

Joe Bursik was a spectator in the England goal until he had to scramble after 23 minutes following a miscued clearance – just his second touch of the game.

The Stoke goalkeeper’s mistake saw the ball fall for Dobra to find Arinald Rrapaj but Bursik was able to recover and gather his deflected effort.

It was a warning against complacency, given how comfortable the Young Lions had been and it boosted Albania’s resolve and belief.

They became more resilient in the face of England’s pressure and Djed Spence’s slice wide underlined some growing frustrations.

But those concerns disappeared when Balogun gave the hosts the lead a minute before the break.

It was a defensive nightmare for Albania and Adolf Selmani, who took a heavy touch under no pressure in his own area and failed in his attempt to poke past Smith Rowe.

The Arsenal star stole the ball and crossed for Balogun to net his fifth goal of the campaign.

It allowed England to relax while Albania upped their hardline tactics after the restart and dished out some rough treatment on Gordon.

Yet they failed to unsettle England and the hosts added a crucial second with 24 minutes left.

Morgan Gibbs-White’s cross was nodded back by Charlie Cresswell for Balogun to head in from two yards.

Aston Villa’s Archer then got his first under-21s goal 11 minutes later when Gordon tormented Albania again and crossed for the substitute to flash in a shot at the near post.

There was still time for Dobra to earn a deserved red card for a second reckless foul on the excellent Gordon.