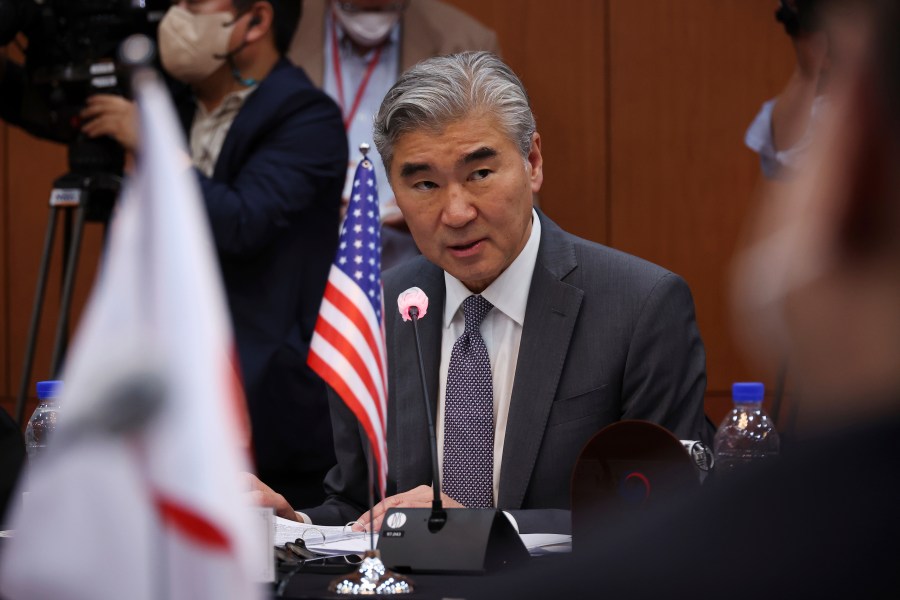 SEOUL, South Korea (AP) — President Joe Biden’s special envoy for North Korea said Friday the United States is “preparing for all contingencies” in close coordination with its South Korean and Japanese allies as it monitors North Korean arrangements for a possible nuclear test explosion that outside officials say could be imminent.

South Korean and U.S. intelligence officials have said they detected North Korean efforts to prepare its northeastern testing ground for another nuclear test, which would be its seventh since 2006 and the first since September 2017, when it claimed to have detonated a thermonuclear bomb to fit on its intercontinental ballistic missiles.

Sung Kim, the U.S. special representative for North Korea, was in Seoul for a trilateral meeting with his South Korean and Japanese counterparts to discuss the growing threat posed by North Korea’s nuclear weapons and missiles programs.

“The U.S. assesses that the DPRK is preparing at its Punggye-ri test site for what would be its seventh nuclear test. This assessment is consistent with the DPRK’s own recent public statements,” said Kim, using the initials of North Korea’s formal name, the Democratic People’s Republic of Korea.

Aside from coordinating with Seoul and Tokyo over contingency planning, Washington is also prepared to make “both short- and longer-term adjustments to our military posture as appropriate and responding to any DPRK provocation and as necessary to strengthen both defense and deterrence to protect our allies in the region,” Kim said.

Kim Gunn, South Korea’s representative at the nuclear envoy, said North Korea’s nuclear weapons and missile development would only strengthen the security cooperation between the United States and its Asian allies and deepen the North’s isolation and economic woes.

“That is why it is so important to steer North Korea back towards the paths of dialogue and diplomacy,” he said.

Nuclear negotiations between Washington and Pyongyang have stalled since 2019 over disagreements in exchanging the release of crippling U.S.-led sanctions against North Korea and the North’s disarmament steps.

North Korean leader Kim Jong Un has expanded his ballistic missile program amid the diplomatic pause and a nuclear test would escalate his brinkmanship aimed at cementing the North’s status as a nuclear power and negotiating economic and security concessions from a position of strength.

Russia and China last week vetoed a U.S.-sponsored resolution that would have imposed additional sanctions on North Korea over its latest ballistic tests on May 25, which South Korea’s military said involved an ICBM flown on medium-range trajectory and two short-range weapons. Those tests came as Biden wrapped up his trip to South Korea and Japan, where he reaffirmed the U.S. commitment to defend both allies in the face of the North’s nuclear threat.

Kim Jong Un’s pressure campaign is unlikely to be impeded by a deadly coronavirus outbreak in his largely unvaccinated autocracy.

Dr. Mike Ryan, the World Health Organization’s emergencies chief, said Wednesday that the U.N. health agency assumes the virus situation in North Korea is “getting worse, not better,” considering the lack of public health tools, despite Pyongyang’s recent claims that COVID-19 is slowing there.

While North Korea has so far ignored U.S. and South Korean offers of vaccines and other COVID-19 supplies, the country appears to be receiving help from China, its main ally and economic lifeline.

GAVI, the nonprofit that runs the U.N.-backed COVAX distribution program, said it understands that North Korea has accepted an offer of vaccines from China and has started to administer doses. It isn’t immediately clear how many doses of which vaccines the North received or how the country was rolling them out.

Some experts say North Korea, with its supplies limited, would prioritize inoculating certain groups based on economic needs, including workers and soldiers involved in cross-border trade or major construction projects Kim Jong Un considers crucial to his rule.

The North had previously shunned millions of doses offered by COVAX, possibly because of international monitoring requirements attached to those shots.

“COVAX has allocated doses to DPRK in several prior allocation rounds, and has always been ready to support Pyongyang should it request our assistance, but so far we have received no formal requests for COVID-19 vaccine support,” GAVI said Friday in an email to The Associated Press.

Sung Kim, the U.S envoy, said Washington would continue to support humanitarian efforts to supply the North with COVID-19-related relief.

North Korea says it has so far found 3.9 million people with feverish symptoms, but health officials have confirmed only a handful of cases as COVID-19, likely because of shortages in testing supplies.

Boeing capsule lands back on Earth after space shakedown