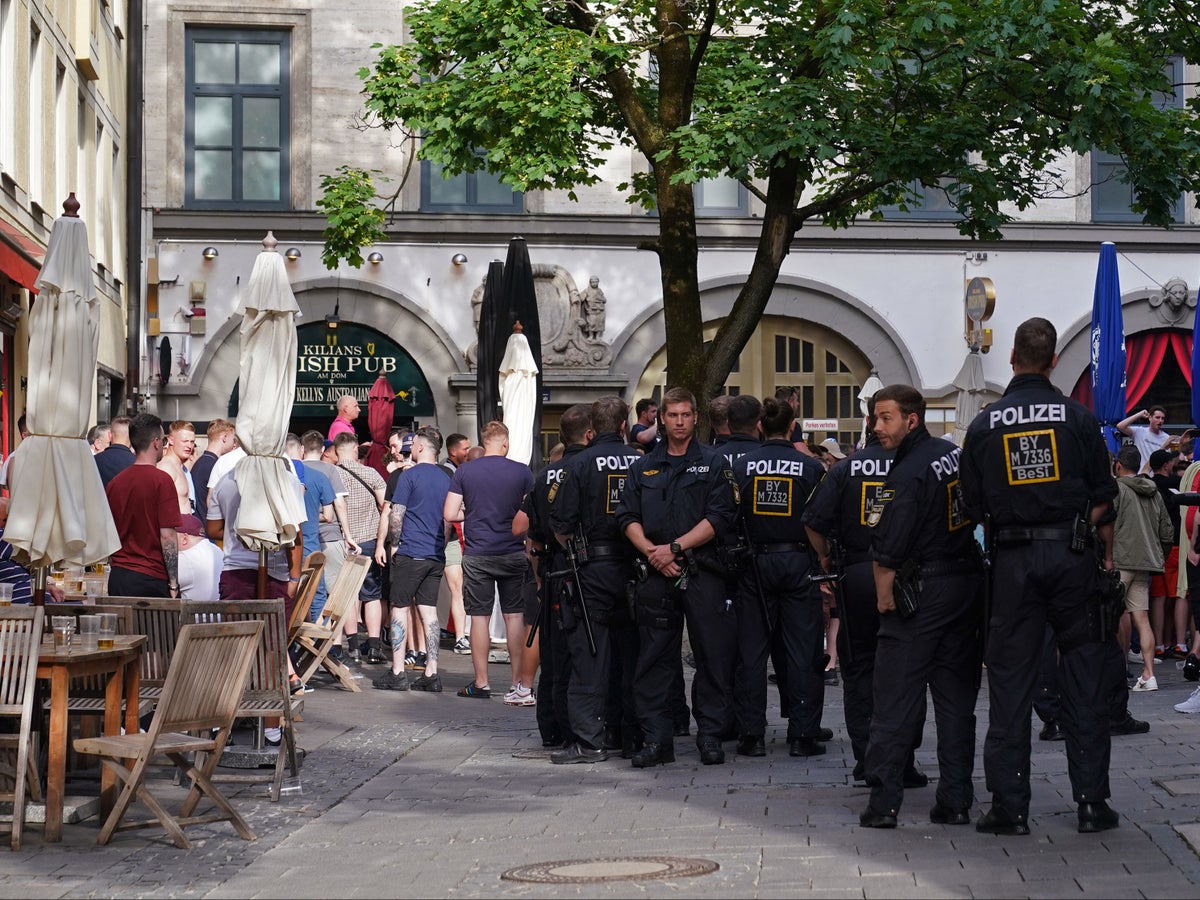 Seven England fans have been arrested in Munich ahead of the match against Germany this evening, UK police have said, including three supporters who were detained for making nazi salutes.

England manager Gareth Southgate had called on travelling fans to be on their best behaviour ahead of the team’s first away match in Germany since 2016 and following the “embarrassment” of the Euro 2020 final at Wembley last summer.

In preparation, the Football Association were on “high alert” for trouble ahead of the match and police confiscated the passports of 880 England fans ahead of the fixture.

Two further arrests were made for inciting police, one for setting off a pyrotechnic flare indoors and another for urinating in public. Officers added that the disorder was alcohol-fueled anti-social behaviour.

England’s Nations League match in Munich was expected to attract a large following of away supporters as the Three Lions play their first fixture away from home and in front of a crowd since before the pandemic.

Local police said troublemakers had been ordered to pay an on-the-spot fine of £170, while two fans who did not have the money for the penalty were hauled in front of a court judge.

Southgate had pleaded for fans to behave amid a warning from the England manager that poor behaviour impacts team performance. England have received an allocation of around 3,500 at the Allianz Arena but there are fears many more have purchased tickets in the home end.

A Munich police spokesman told the PA news agency that police would only be able to stop England fans going in the “home” end if there was an expectation they may cause trouble.

England will play their Nations League fixture at home to Italy behind closed doors as punishment from Uefa for the disorder at the Euro 2020 final at Wembley last July, amid fears that further bad behaviour in Munich would lead to harsher measures.

Asked if he had a message to fans heading to Germany, Southgate replied: “Well, I doubt they’d listen to it really because we are always sitting, giving those messages but frankly if people are going to cause trouble, it is not going to make a jot of difference what I say about it.

“I just think we’re representing the country, so is everybody that travels. We should be good ambassadors for our country and leave a good impression. Thousands of football fans every year do that and are welcomed back and are greeted warmly by people all around Europe when they travel.

“So, I think everybody that leaves this country, goes on holiday or goes to watch football matches has that same opportunity and responsibility.”

County SFL Division 1: Dr Crokes take derby spoils to close to within one of leaders Spa