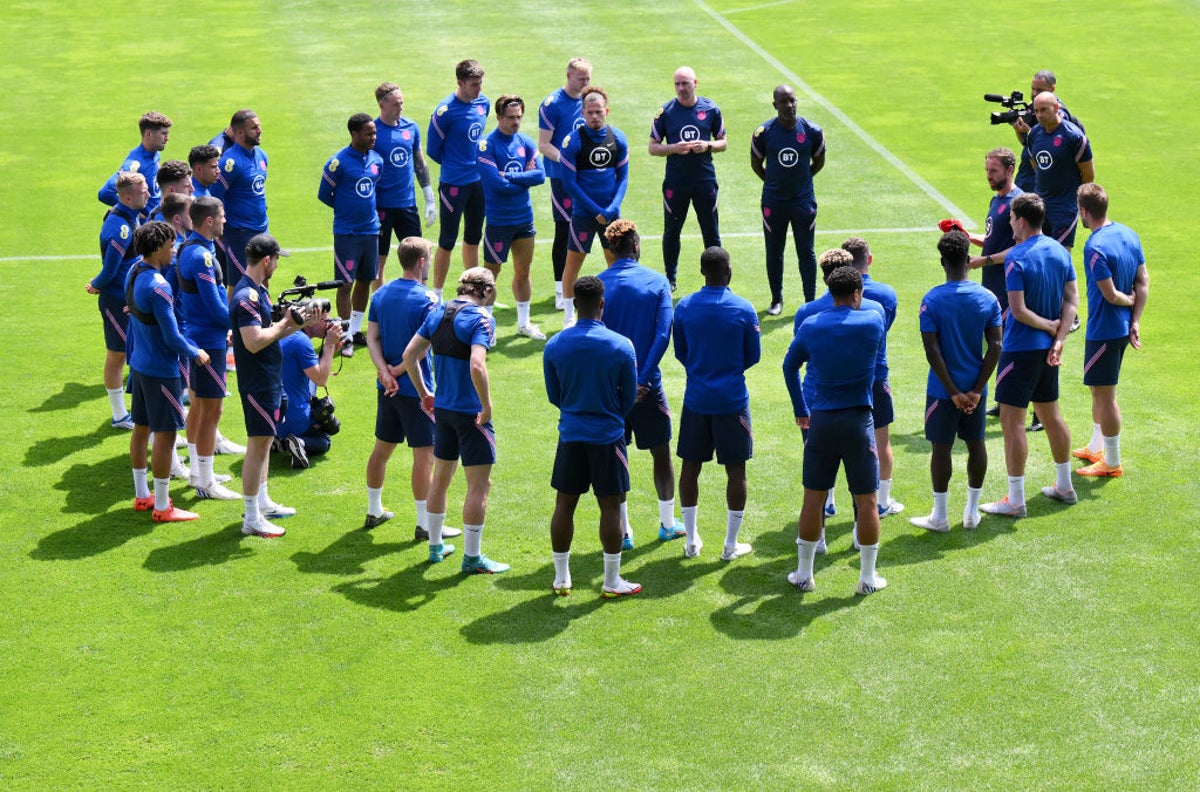 To realise how misleading the period between tournaments can be, you only have to consider England’s last trip to Munich, before Tuesday’s return.

That was of course the famous 5-1 in 2001. And yet Gareth Southgate, who was on the bench that day, points to what happened next with Germany.

“They ended up in the World Cup final on the back of that qualifying campaign.”

It offers rationale for why Southgate is willing to sacrifice these Nations League games for the benefit of November.

It is also why he is vigilant of a growing perception that Germany are not at that top level right now, or are somehow lesser to this England team.

“They are never in the doldrums for long,” the England manager said. “They are still a huge benchmark, I think.”

It is still feasible that Tuesday’s match, regardless of any changes in the context of the fixture, could be a benchmark for the World Cup itself.

There is at least the possibility that Germany and England go into it as the two strongest sides and in the best position to win it.

Brazil, who Southgate also namechecked in that regard, may have something to say about that but it is certainly true that the international game is in a state of flux. That makes it all the more valuable that both of these squads in Munich approach it with a clear sense of themselves.

England probably have more players than anyone else closer to their prime, and with proper tournament experience.

“You can see elements of what he did at Bayern Munich,” Southgate said, before referencing their 1-1 draw away to Italy. “Seven of the team that played the other night are either current or have just left Bayern, so there’s a lot of experience, cohesion of working with him. You can see the counter-pressing, the general pressing, the forwards especially, so we have to be prepared for that and of course with the ball they have some talented players.

“In some respects, the result in the summer saw their qualities overlooked. It was still very high. World Cup winners everywhere, Champions League winners everywhere. So really experienced at those big occasions. For me, Germany and Brazil are still the benchmark in terms of the countries who have consistently won tournaments – even when everyone will talk about the 5-1 here.”

The most recent frame of reference is last summer, though, and a result that John Stones believes was a “turning point” in Euro 2020. It was also a landmark in terms of England’s wider development.

Southgate’s side had been relatively unconvincing in the group stages, and had ground out a 1-0 lead against Germany in the round of 16 albeit with the game in the balance going into the last 10 minutes. It was then that Raheem Sterling, who had scored the opening goal, left a pass short to offer a huge opportunity to Thomas Muller.

Stones was almost directly in the firing line. “I remember it breaking somehow,” the centre-half says. “It was a heart-in-mouth moment.”

It was also a rare moment when Muller missed. The Bayern forward screwed his shot wide.

“We had that bit of luck that every team needs in those situations. I remember Raheem’s reaction when he did it. It didn’t faze us after that, we kept playing, kept going, we learnt from it, we didn’t place us in those sort of positions again. I don’t really want to experience that again.”

It was another transformative experience for England, though.

They had not just beaten a side that the country had a huge psychological complex about. They had beaten a big name in a big game, and it was not a coincidence there was a release against Ukraine in the 4-0 quarter-final victory.

“I think it was probably the turning point in that tournament of feeling the belief that we could go on and try and win this,” Stones says. “The atmosphere was, we were gaining fans every game, so that was a big game.

“For us to play against top-tier opposition, top-tier players, and play the way we did, it gave us that belief that we can compete with these teams, and with these players on a regular basis. In the past, I’ve had a feeling as a team it’s a difficult fixture, or it was a difficult fixture, and I feel the mentality has changed almost in that we know that we are capable of winning this game. So there’s a big shift in mentality.”

It is one of a few reasons why there are a few more layers of complication to Tuesday, for a game that Southgate has admitted is ultimately about preparation for the World Cup.

It is because of this he wants to experiment, to see a few different options. There’s also the argument for not revealing all of your weapons before you most need them. Southgate similarly wants to keep his likeliest starters on their toes, and not allow them to get comfortable, while considering their different levels of fitness.

“I’m not going to talk publicly about situations that are going to affect the players, because I’m managing their individual motivations, where we want that competition,” Southgate said. “We know, if we’re playing a World Cup tomorrow, we know what team we’d be picking with the squad we’ve got available here this week. We’ve got clarity. It’s not that we’re not very clear on what our best team would be. That would change slightly depending on the profile of the opponent.

“But to throw another ‘but’ in, there will always be another Bukayo [Saka] type who we just felt in the Euros last summer he was playing so well we’ve got to put him in, and he delivered. You’ve always got to have that open mind to those things.”

And there’s then the most powerful element of all. It was what Stones referenced. It is the emotional momentum of a big win.

“Well, I think you always want to win big matches,” Southgate said. “The more evidence the team has they can win big matches, the more belief they get, and if that’s channelled in the right way, then that’s a real positive.”

The other side of that is the potential negative of a second successive defeat.

“I know there are factors behind Saturday but the reality is that it’s a defeat that is not one we should have. We should not be going to Hungary and not winning the game, or certainly not losing the game. Frankly, I can ride that. It’s the team that I’ve got to protect.

“We’ve talked a lot about how we could be in the middle of a tournament now. In our previous two tournaments, we won our first game and qualified comfortably after our second. This is the sort of scenario we could find ourselves in, where there is more pressure and there is the need to go and perform against the big team in the second game.

“I think it’s good for our staff and our players to go through that. It’s not what we would have chosen because we would not choose to lose the game. But we’ve had so long since we experienced a defeat that that little jolt – we wouldn’t have chosen it, but we’ve got it now – it’s a good opportunity to see how everybody reacts.”

Germany have shown they know how to react, never more so than in 2002.

Southgate has much more to consider.

There are few games that bring focus for England, though, like a match with Germany. That will be seen on Tuesday, and could be very important in seeing what happens next.