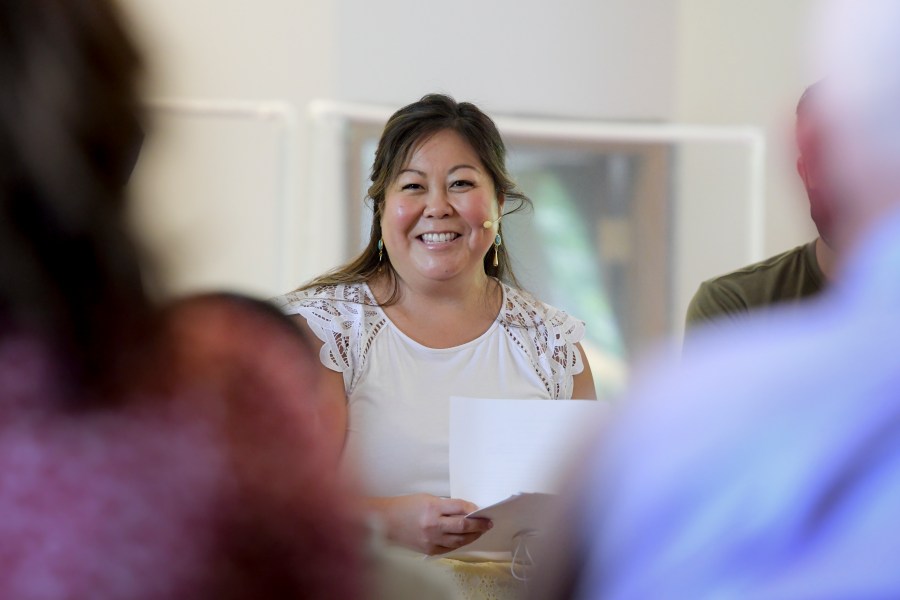 About two years ago, when coronavirus cases began to peak in her impoverished San Antonio neighborhood, the Rev. Norma Fuentes-Quintero found herself taking on an additional duty – helping congregants deal with anxiety.

The pastor, who leads El Templo Cristiano Assembly of God, which is largely Latino, has spent hours with one congregant in particular — a woman with seven children — who was consumed by the fear that the virus would kill her and leave her children motherless.

“Each phone call with her would last 30 minutes to an hour,” Fuentes-Quintero said. “Some days, she would knock on my door. I would give her water, massage her head, and rub her arm until she fell asleep. It got that personal.”

Fuentes-Quintero’s situation is common in communities of color where a lack of resources, poor access to health care and stifling stigma over mental health issues have turned pastors into counselors and caregivers. These were also communities that were disproportionately affected by COVID-19.

In addition to the pandemic, difficult conversations about anti-Asian hate and systemic racism after the Atlanta spa killings and the murder of George Floyd, have significantly raised stress levels in these communities. Faith leaders say they are overwhelmed, exhausted, burned out and left with serious questions about how to care for their own physical and mental well-being while helping congregants in a meaningful way.

Such self-care is not so simple especially in some cultures where pastors are expected to always be present physically and spiritually, said the Rev. Pausa Kaio Thompson, head pastor of the Dominguez Samoan Congregational Christian Church in Compton, California.

In his state, Pacific Islanders died at a higher rate from COVID-19 than any other racial group and pastors like Thompson, on certain days, officiated two or three funerals – sometimes, for members of the same family.

In Pacific Islander communities, pastors tend to a variety of needs, from food, healthcare and employment to housing and immigration, he said. The pandemic was a unique situation because the source of everyone’s grief – whether you were in the pulpit or the pews – was the same.

“How do I talk about my own mental instability and doubt at a time when I cannot relay that to someone I’m there to uplift and comfort?” Thompson said.

He decided to seek psychiatric counseling and take the time whenever possible to unwind. A third-generation pastor, Thompson said the remnants of colonialism still haunt clergy in the Pacific Islander community. The missionaries, when they arrived in the islands, trained locals to go into dangerous terrain, teaching them “to give all and die for the faith,” he said.

“We still live by that theology and it’s really hurting us,” Thompson said. “We need a new way forward.”

It is important to remember that “clergy are human beings,” said Bishop Vashti McKenzie, interim president and general secretary of the National Council of Churches and a retired African Methodist Episcopal leader.

“When you add racial unrest on top of burying more congregants than you’ve ever had in your whole entire ministry,” on top of losing loved ones in one’s own family, it can all add up, McKenzie said.

The challenges facing clergy of color were on display recently during a virtual event hosted by the Christian organization Live Free, two days after a mass shooting at a supermarket where 10 Black people were killed in Buffalo, New York.

The Rev. Julian Cook, pastor of Buffalo’s Macedonia Missionary Baptist Church, described a clergy colleague who was unable to meet a request to provide grief counseling to local bank employees.

“She had to tell them flat out, ‘I’m just not in a place where I can even talk about grief right now,’” he said during the online event.

The strain of having discussions about race and racism led to burnout for Pastor Juliet Liu, who co-leads Life on the Vine, a Christian congregation in Long Grove, Illinois. She is getting ready to start a six-month sabbatical in July. Liu said she is not sure if she will return to ministry.

“For me, it’s not just the pandemic, but also the conversations about race and the anti-Asian hate,” said Liu, who is of Taiwanese and Vietnamese descent. Her congregation is predominantly white and about 20% Asian American.

Liu said she started seeing a therapist three years ago. That has helped her understand that she cannot hold herself responsible for “how white people understand and respond to racial justice,” she said.

Yet she feels disillusioned when some white congregants question the existence of systemic racism.

“I’m asking myself if I’m in the right place,” Liu said. “I’m questioning my calling.”

Many pastors have found comfort during this time knowing they are not alone, said Washington D.C.-based psychologist Jessica Smedley, who saw an increase in requests for assistance from Black clergy and African American congregations. She has held virtual webinars as a form of support.

“It gave them the opportunity to hear from other clergy that they were experiencing some of the same grief or stressors of not being in person or not knowing how to show up for their congregants in the same way and not being able to visit the hospital because of safety issues,” she said.

A recent Rice University study found that Black and Latino churchgoers often rely on their pastors for mental health care, but their clergy feel limited in being able to help them. Smedley said there is need for more research about clergy of color and rates of depression.

The Rev. Danté Quick has made Black mental health an area of focus at the First Baptist Church of Lincoln Gardens in Somerset, New Jersey. The senior pastor has also attended to his own mental health needs and advises his congregants and seminarians to do the same.

“Preaching about George Floyd and Breonna Taylor, and the (psychological) trauma that we have to try to shepherd people of color through requires an intense amount of empathy that wears on one’s spirit.”

Quick says he copes by taking time for “joy seeking” activities – like a nice restaurant meal, an Anita Baker concert, or joining his mother in watching her favorite TV show. He also now has a personal phone and a church phone “so I can put one down from time to time.”

“I want to live to see my children’s weddings,” he said.

Associated Press religion coverage receives support through the AP’s collaboration with The Conversation US, with funding from Lilly Endowment Inc. The AP is solely responsible for this content.

The pluses and minuses of Elon Musk’s Twitter buyout