Their Cape Canaveral will be the rocky moonscape of an old gravel quarry huddled on the seemingly endless space of the southern Alberta prairie.

If all goes according to plan from an open-air mission control, the Kronos E, a 1:20 scale replica of the Saturn V rocket that took Apollo 11 astronauts to the moon 50 years ago next month, will achieve liftoff around 9 a.m. on Saturday.

Calgarian Shane Weatherill wasn’t old enough to witness that momentous event on TV five decades ago, but the prospect of paying tribute by lofting the largest model rocket in Canadian history is a giant leap in itself.

“To most of the people in this hobby, the moon landings are the culmination of the space program, though NASA has done a lot of cool things since,” Weatherill, 45, said Thursday as he helped set up the launch site about 100 kilometres southeast of Lethbridge.

“The Saturn V rockets are epic . . . I’ve seen these re-creations happen in the U.S. but not in Canada.”

We set up an environment so if it fails, it fails safely.

Dozens of other model rockets will also be launched Saturday at the Rock Lake site, “but ours will be by far the largest . . . we’re at the top level of what we can fly.”

For the past 18 months, Weatherill and fellow seasoned flyers John Glasswick, Ian Stephens and David Buhler have assembled the six-metre tall, 90-kilogram rocket in the garage of the latter man’s Beddington Heights home.

In the middle of this week, they transported its sections in three vehicles to the launch site, where it’s been reassembled with a battery of avionics, computers, recovery systems and five solid fuel rockets packing enough power to hoist an adult male 2,500 metres into the heavens.

While the chance of an explosion or horizontal launch are remote, Weatherill and his colleagues will launch the rocket, which is decked out in the white and black trim colour scheme of its Apollo parent, by radio control from 500 metres away.

“It’s rocketry, so there’s a slim chance of a launch problem. We do everything we can to mitigate that,” he said, adding trajectory engineering and a downrange ballistic recovery zone are designated for just such an eventuality.

“We set up an environment so if it fails, it fails safely.”

If it succeeds, an inner engine’s ignition will activate four surrounding counterparts to shoot the Kronos E on a one-minute ascension to an altitude of 2,500 metres.

After that, four sections, including a mock-up of the original’s command module and escape tower, will individually drift back to Earth by parachute.

Building a static model is one thing, said Weatherill.

“But it’s really rewarding to make something like this and make it functional,” he said.

“We’ve learned a lot from building this.”

Those lessons included mastering a 3-D printing technique that crafted parts of the Saturn V mockup built of plastic, birch plywood and cardboard.

“I could send crickets, but I couldn’t send a gopher,” said the man’s who’s been involved in high-powered rocketry for two decades.

Another difference is its visible Canadian markings that’ll dovetail into a red and white flame pattern when the engines ignite on the nation’s 152nd birthday weekend, said Weatherill.

Here’s a Graphic News infographic showing how the real Saturn V rocket carried astronauts to the moon back in 1969 (click on image to enlarge): 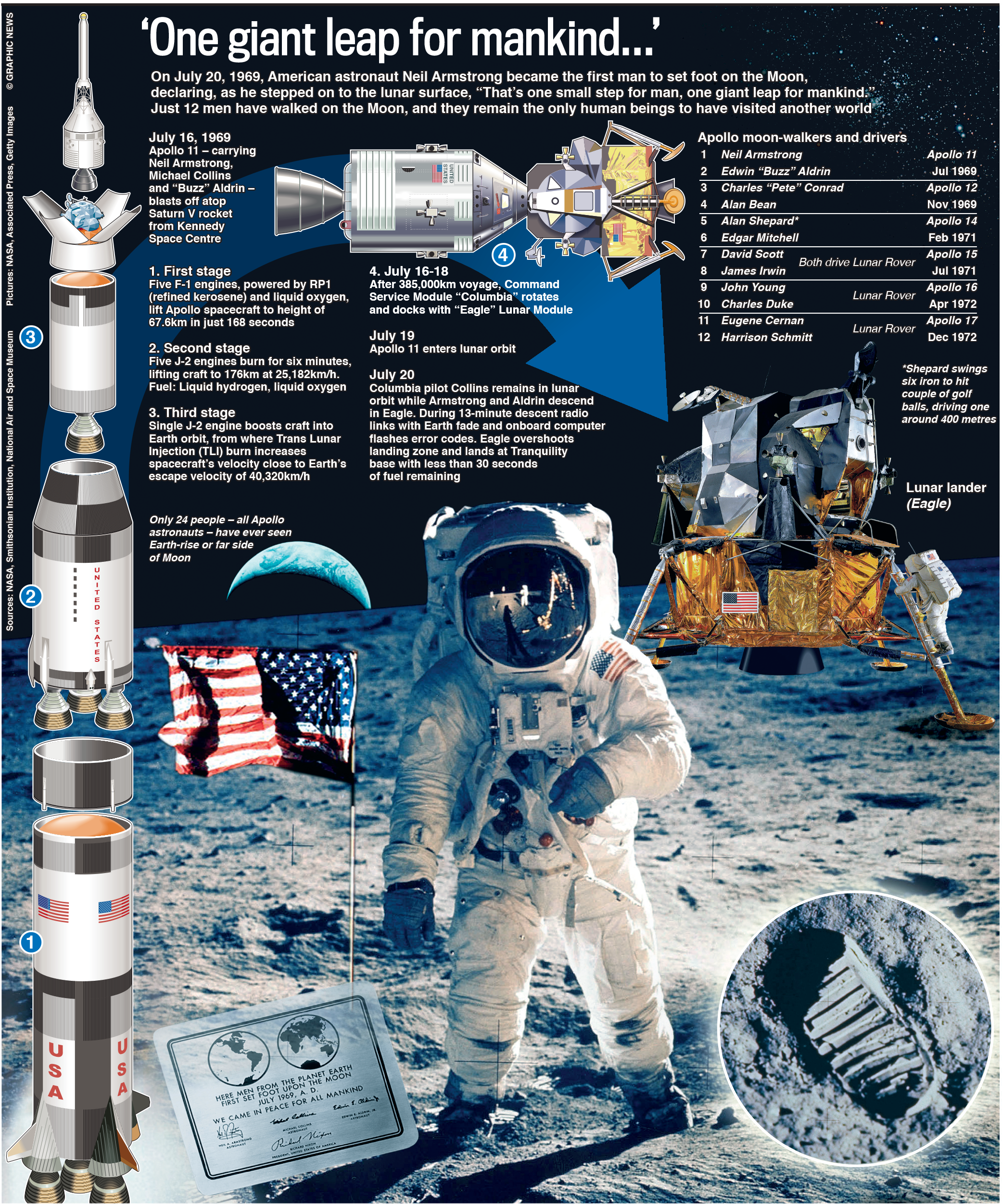