Alberta is on pace for a better economic year than previously predicted, due in large part to the Russian invasion of Ukraine, but the conflict could have negative effects if it drags on.

Rob Roach, ATB’s deputy chief economist, said Thursday that Alberta’s GDP is now expected to rise five per cent, up from a forecast of 4.4 per cent before the invasion. While he said the report is positive, there are some headwinds.

Much of the positivity has been driven by an oil and gas sector that continues to outperform expectations, due in large part to the conflict in Ukraine that has strained global supplies and driven up demand for oil and gas from Canada.

“We do think Alberta will have a decent year and overall economic growth, but it will vary for a lot of different individuals, families and businesses,” he said. “It might not feel like a particularly good year because of the turbulence and still trying to recover from the last two years of pandemic.”

He said despite efforts to diversify Alberta’s economy, the province is still heavily reliant on oil and gas.

Trevor Tombe, an economics professor with the University of Calgary and a research fellow at the School of Public Policy, estimated the amount of oil and gas investment pre-bust at around $40 billion to $50 billion per year.

The forecast further predicts Alberta’s GDP growth to drop to 3.4 per cent in 2023 and 2.7 per cent the following year.

The report also projects Alberta’s annual unemployment rate at 6.7 per cent, although the province is currently sitting at 5.9 per cent.

There are other challenges ahead. 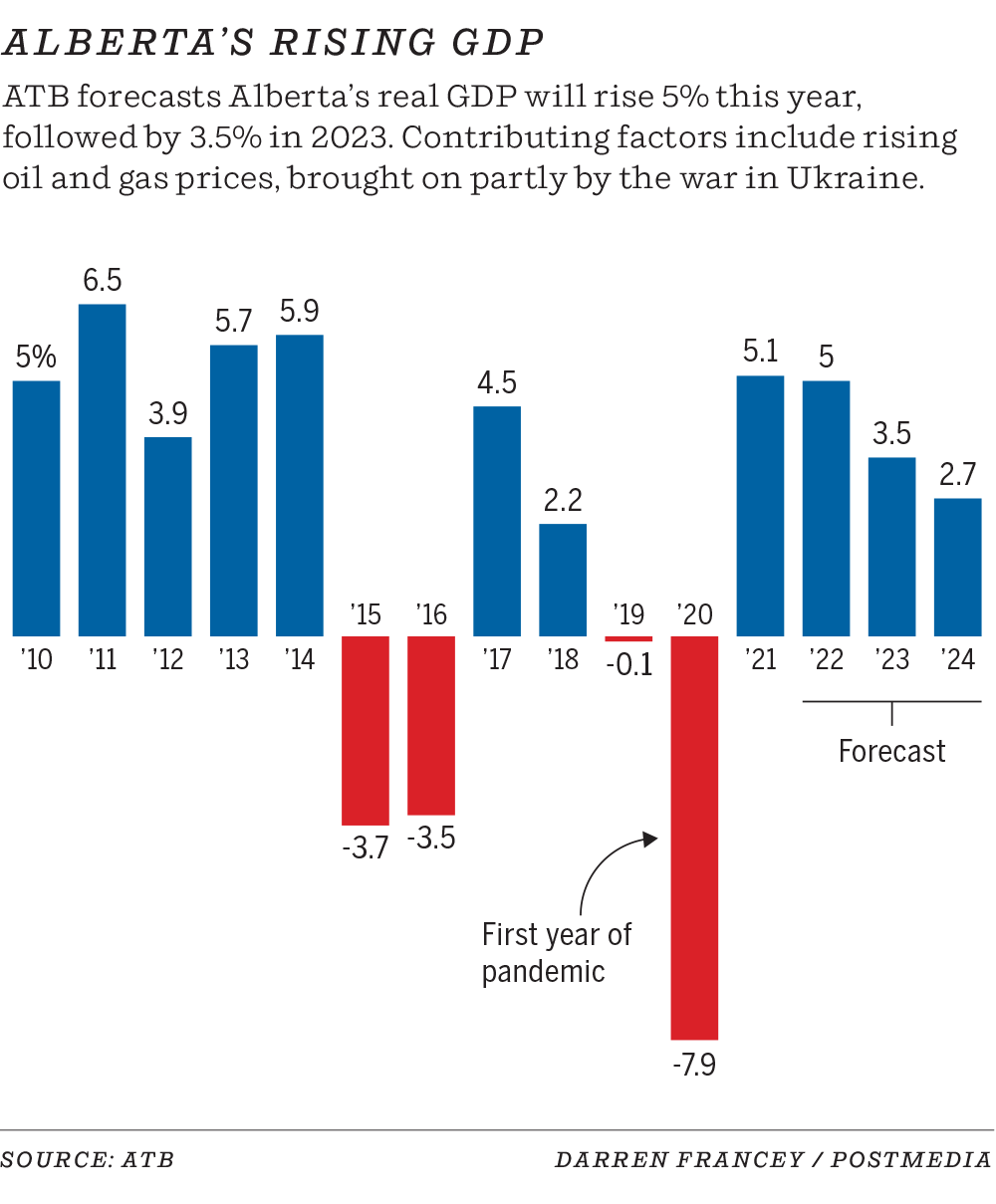 The conflict in Ukraine has also inflated the value for other commodities such as wheat, but the gains in the agriculture sector have been largely offset by the rising cost of inputs such as fertilizer due to the war and weather disasters.

Inflation also continues to be a major issue. Roach said there is hope that the Bank of Canada raising the interest rate will help chill the cost of living increase but it is not a guarantee.

“The fear is if that doesn’t work, if it doesn’t also bring down inflation, we’ll have a situation where we are actually reducing our economic output and slowing growth without a big impact on inflation,” he said. “That’s the worst-case scenario.”

Tombe also said he does not expect the decision by Premier Jason Kenney to resign to knock the province off its trajectory.

“The government doesn’t matter as much as people think for how the economy grows or shrinks, they matter only at the margin — they can nudge things here or there,” said Tombe. “It doesn’t matter who the premier is or who the governing party is in the short term, and in an economy like Alberta, especially, it’s going to rise and fall based on factors external to the province.”